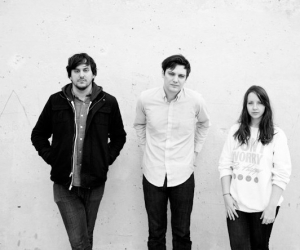 Grooms’ latest LP, Infinity Caller, is out now on Western Vinyl (order it here), but you can also stream the entire LP right here. The band is currently in the process of finalizing a fall tour so stay tuned for additional shows after their East Coast run with Clinic. See below for those dates!

Harking back to the peak of boisterous guitar-driven indie rock in its heyday, the eleven-song record features finely tuned layered guitars and perhaps Grooms at their best to date.  With the departure of drummer Jim Sykes, the band has also expanded its line-up.  Joining long-time members Travis Johnson and Emily Abruso, are Steve Levine (who is also a member of comedic/creative team Captain Hippo, and responsible for shooting the “Alone” video) and Jay Heiselmann (of The Immaculates and French Miami).

Travis Johnson’s OCD (a religion-centric form of OCD called Scrupulosity) has guided all of his adult life’s pursuits, from inspiring his initial interest in music to his current day job making guitar pedals at Brooklyn’s Death By Audio.  After releasing two albums on a prestigious indie label, the band still hadn’t gained enough traction to support themselves with their music and they were understandably ready to call it quits.  However, in 2011, impressed with their albums and live shows, author Michael Azerrad invited Grooms to perform at his Our Band Could Be Your Life show alongside St. Vincent, Ted Leo, Wye Oak, Dan Deacon, and WV alumni Dirty Projectors.  It was a huge opportunity for the band, and the catalyst for what would become their new album, Infinity Caller.