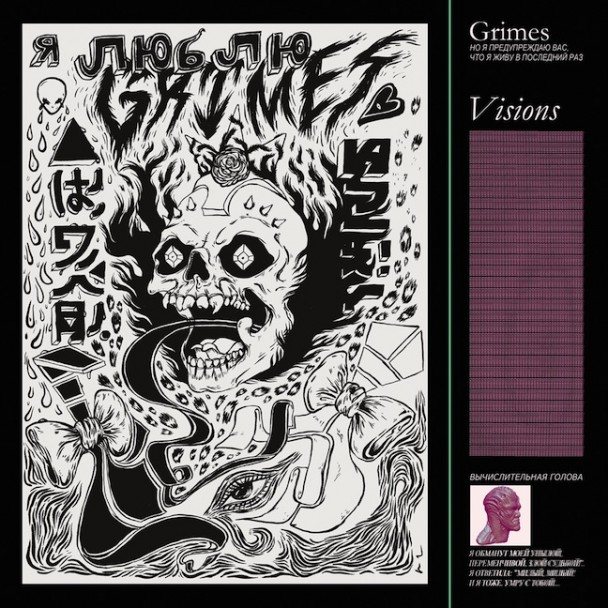 In episode 176 of “The Simpsons” we were introduced to one of the most popular one-off characters in the series: Frank Grimes. As one of Homer’s co-workers, Grimes becomes increasingly annoyed to the point of insanity at Homer’s laziness and incompetence despite leading a comfortable life. While this may or may or not have anything to do with Claire Boucher’s solo moniker, it is a cautionary tale of what can happen to artists if they get frustrated by their lack of success despite their efforts, while others seem to get overnight success. Now I’m not saying that Boucher is in that category but she certainly has a lot going for her: she’s got a cute voice, she’s hip, and she’s pretty. The problem though is her music isn’t that interesting.

Visions is Grimes’ fourth album, and the first that is being released with 4AD, although it is still being released in Canada with Arbutus. That means that Grimes is ready to venture out globally with her soft electro beats, and high falsetto voice. It’s basically your standard music you’d find on “Chill Out” satellite radio stations that you hear quite often in an Earls or any other types of restaurants that cater to a younger hipper crowd. There’s a reason that its gets played in restaurants a lot because it’s electronic, so it sounds modern, but it doesn’t have large volume fluctuations, so it just stays at the edge of your auditory perception. Never really enticing you, but you never really notice you’re not
really interested in it either which is kind of what happens throughout Visions. While past Grimes efforts have shaded on a bit of the darker side, the new album feels very light. When you have a falsetto singer it works better if the music feels slightly ominous to give it a little more substance, otherwise everything just feels too cute.

Grimes could very well do okay with this new album as a track like “Oblivion” clearly stands out, but I’d be surprised if it broke through with any significant notoriety, but that’s not to say that she can’t in the future. Like I said, Grimes has a lot going for her, so she shouldn’t get frustrated, but maybe she needs to bring in someone to collaborate with musically to change things up. Right now I feel like Homer falling asleep at Frank Grimes’ funeral.