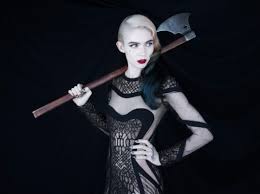 Grimes will perform at Lollapalooza, FYF, Moogfest and Hangout Music Festival and will open for Florence & The Machine in arenas including two nights at Barclays Center in Brooklyn, NY ‪on June 14 and ‪June 15. She has Canadian dates on the summer tour circuit, with shows at Bestival in Toronto and Osheaga in Montreal. See a complete tour schedule below, and find more information here.