“Goodbye” By Circa Waves

Circa Waves has unveiled the official video for “Goodbye,” taken from their new album, Different Creatures (Virgin Records). The clip is filled with explosive footage from the band’s sold-out U.K. headline tour.

Different Creatures was co-produced by Alan Moulder (The Killers, Arctic Monkeys, Smashing Pumpkins). The album is the grittier, nighttime counterpart to the breezy summer vibes of the band’s debut album, Young Chasers, which contained the hit single “T-Shirt Weather.”The pop sensibility is still there, but now it comes buried in up to 11 alt-rock guitars. It’s a set of songs written by someone very much aware of what is happening in the world, in both a personal sense and a wider sense.

“I feel like I’ve got a fire in my belly with this album,” says lead vocalist/principal songwriter Kieran Shudall. Alongside more personal songs like opener “Wake Up” – about coming to terms with one’s demons – and “A Night On The Broken Tiles” – about drinking on the road – are songs like “Different Creatures”,” written after Britain had agreed to let in 20,000 Syrians.

“I remember I just thought it was really bizarre that you could put a number on it,” says Kieran. “It just got to me. Like how can you put a cap on it, how can you stop people trying to save their kids’ lives?”

“Stuck” takes aim at “poisonous TV” and a generation glued to Instagram, yet has a twinge of optimism. Kieran explains, “I know we’re stuck, but, it’s gonna get better. And I tried to put that in all the songs.” 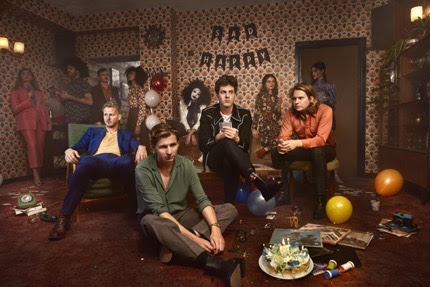