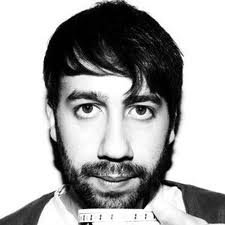 Nearly three years after the release of his debut album, Gold Panda returns with his second album Half Of Where You Live, to be released on Ghostly International and his own NOTOWN label (UK) on June 11th. The album is the product of a period spent touring the world multiple times around, absorbing influences and probing potential new avenues of creative exploration. Listen to the first single “Brazil” here.

Half Of Where You Live represents a stylistic and thematic advancement from Gold Panda’s previous work, expanding on the ideas he presented on 2012’s ‘Mountain/Financial District’ 7” and this March’s Trust EP. It reflects its creator’s nomadic existence — you can see the influence of his travels in track titles like “Brazil” and “Enoshima,” in the oriental textures of “My Father In Hong Kong 1961” and “We Work Nights,” and in the sounds of “Junk City II,” conceived as a hypothetical soundtrack to ’90s anime and the films of controversial director Takashi Miike.

“These films depicted a post-economic boom Tokyo in the 1990s”, the producer explains, “and there was a last days feeling in them. [The feeling] still lurks [in Japan]. I saw a return to that possible dystopia. I’ve seen people in Osaka walking around, jobless, mental, stricken. I think real desperation and poverty is returning; it’s quite scary.”

The whole album, in fact, is described as a “city album” by its maker, and it’s easy to see why — each track possesses a different aesthetic and reflects a different environment. Gold Panda describes it as “a jump from location to location… I felt like I was stealing a piece of each place I went to.” ‘Community’ is a house-tinged reflection on cultural divides in London, while “Brazil” catalogs Gold Panda’s arrival in Sao Paolo: “I wanted to make a track that soundtracked my ride from the airport to downtown” he explains. “The [vocal] sample is kind of like an excited chant, bigging up the place, then it all gets confusing to replicate the traffic and buildings.”

Taking on this loose concept has meant a more considered approach for Gold Panda, and the music has harsher edges than his previous work, and an almost hauntological feel at times. Crucially, though, this new approach hasn’t compromised the producer’s creative freedom, and the album still flows with his trademark organic vibrancy. “I’ve tried to really focus on just a few elements,” he explains. “I tried to avoid chopped up female vocals this time around, as it’s become pretty well done, and anything that was too solid structurally. Ultimately, though, you just you find your groove and settle into a sound and realize you only really need to please yourself.”