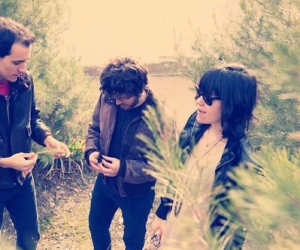 Gold Lake founding members, Carlos del Amo and Lua Rios, have been busy the last few years putting the finishing touches on what ultimately would become Gold Lake. In the Fall of 2012, already a trio at this point, they wrote and recorded what will be their debut album Years in Madrid, mixing it in Seattle with legendary producer Phil Ek (Fleet Foxes, The Walkmen, The Shins, Father John Misty).

With an album in hand that puts Rios’ vocals on full display against a soaring, sonically rich backdrop, 2013 has seen them talking to a few different record labels about where the album will ultimately find a home. In the meantime, the band has been itching for the world to begin to hear the new material, and they’ve announced the release of the two-song We Already Exist single on June 18th, 2013.

The single also features a head-turning remix of the song by The Helio Sequence, and a video for the track was recently wrapped and will be out soon as well. Last but not least, Gold Lake has announced a string of New York shows throughout the month of June.
After enlisting drummer Dave Burnett, Gold Lake played it’s first show in November 2009.  In 2010, they toured with Peter and the Wolf and Nada Surf followed by another tour with El Guincho, in addition to playing FIlter Magazine’s Culture Collide Festival.  They then contributed a track to Guilt By Association Vol. 3 (Temper Trap, Devendra Banhart, Matt Pond PA, Frightened Rabbit, etc).