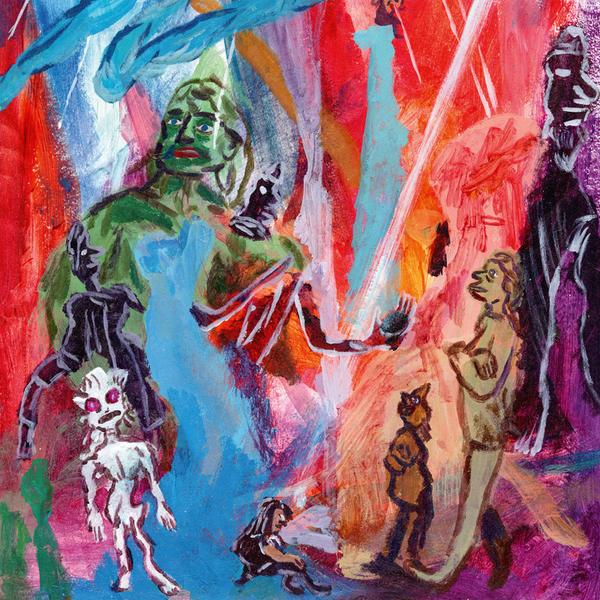 The ascent of South London’s Goat Girl has been a sharp one; the four-piece signed to Rough Trade six months after completing their line up – notably on the day the United Kingdom voted to leave the EU, so for most that day was pretty shit and for Goat Girl it was a weird mixed bag of emotions, “it was such a bittersweet day. Like, should I feel happy or fucking sad?” recalls vocalist Lottie ‘Clottie Cream’ Ellis on that pivotal day back in June 2016. Leap forward to 2018 and the quartet are readying their self-titled debut LP, which acts as a window into the band’s world; it’s an album that lives in the half-light, where shadows are tall and things can easily take a sinister turn.

South London is in the spotlight at the moment, due to the likes of Shame, Sorry, Bat-Bike and of course, Goat Girl catching the attention of music fans and tastemakers alike. What binds them together is their creative nature and it’s nurturing environment meaning young bands are getting the chance to air their wares with likeminded souls. Whilst it’s easy to lump them all into an indie or punk bracket, Goat Girl’s sonic personality is a trickier one to pin down; there’s hints of surf-guitar twangs, macabre drawn out strings and steadfast drumming that creates a moody aesthetic. Darkness looms close to the album’s baroque stylings, where tracks can begin in an elongated lumbering manner before galloping at a breakneck pace, ‘The Man with No Heart or Brain’ typifies the act’s knack for gradual shifting dynamics, whilst ‘Little Liar’ just goes for broke from the off, a fast sprint of rampant beats and razor-like guitar lines. ‘Viper Fish’ opts for the middle ground, a track built on subtle peaks and troughs – where chanted, drawled vocals give way to a ground swell of brooding atmospherics.

‘Goat Girl’ occupies the darker recesses of the human psyche, with ‘Creep’ telling the story of a dodgy sounding fella “with his dirty trouser stain” who “wants to smash your head in” whilst on the train. This is all played out to the sound of boom-clap drums and anxiety inducing violin quivers. ‘Country Sleaze’s explosive quiet/loud pendulum swings has Ellis plaintively teasing “touch my body/touch my soul/touch that deep and disused hole”. More sexual provocation crops up on single ‘The Man’, a randy, country-cum- surf-flecked ditty for the frustrated which has Ellis tracing the gaze from her object of affection “watching your eyes/watching my thighs”.

The group’s debut boasts 19 tracks, with instrumental interludes strewn liberally throughout, to give the album a scrapbook feel. ‘Goat Girl’ hangs together well but you get the sense that stylistically, for their next record they could easily flip 180 degrees and put out something completely different. Right here and now, the four piece have laid down a solid foundation, which most likely will pave the way to an interesting and surprising future.