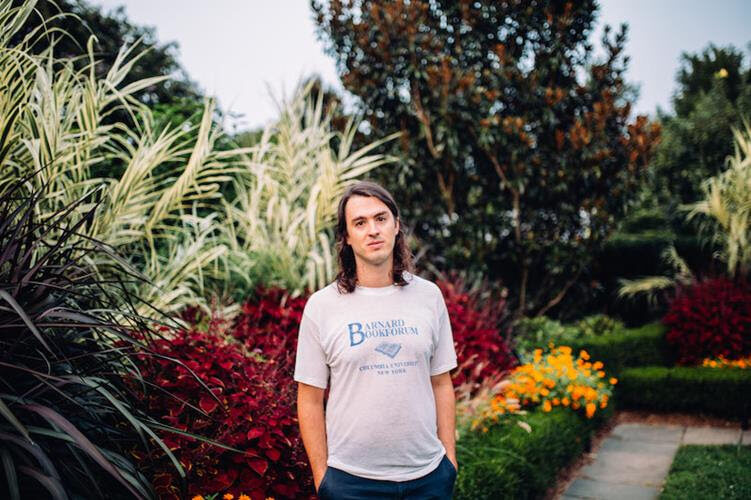 Glitterer Photo Credit: Farrah Skeiky
Words by Adam Fink
Share on TwitterShare on PinterestShare on PocketShare on RedditShare on FacebookShare on Email

Touring isn’t always the easiest thing. With the long drives, not eating properly and playing your heart out to fans every night, it’s easy to imagine how exhausting it can be. Now imagine being out on the road when the world shuts down. Ned Russin was on tour overseas when life stopped. The musician, songwriter and producer of acclaimed band Title Fight, and more recently his solo project Glitterer, was in the UK in the middle of a seemingly regular tour. “The idea was to have a couple of different sessions, one of which in Paris with a friend while I was on tour out there,” Russin says when we reach him on the phone from his home in Washington, DC, of the plan for recording his new album Life Is Not A Lesson.

“We went to Europe and Covid was like a thing people were already talking about. It was already starting to be a problem in some countries but everything so far seemed fine and under control. We were in mainland Europe for a week and then the UK for a week and then we were supposed to go back to mainland Europe to finish up. I believe we were in Glasgow. It was a stereotypical tour night,” he says with a laugh, “we finished the show and were trying to check into this hotel at like three am, tired and hungry. There was some issue with the hotel so we drove and found another hotel, checked in and as soon as we got in the room, everyone’s phones started blowing up. Trump just announced that the US was shutting down travel from Europe and everyone’s family was phoning saying you guys have to change your plans right now. It was intense. We went from joking around to being terrified for our lives. We ended up having to finish the last two shows in the UK and the energy had completely changed. Some people were sick out there but there were no masks, no sanitizer, no one really knew what was going on yet. We played two more shows and on March 13th in London, we flew out and came home. I had to quarantine for a couple weeks so I stayed in my basement and started recording and that’s when everything took off. It didn’t feel like it at the time but it was one of those big life moments. When you are on tour you end up in these situations so crazy and think this thing will be something I will remember for the rest of my life but the more they happen they more they become normal. I was wondering when we left London if this would be something I’ll remember in like 10 years and it seems that it is going to be one of the more significant memories I’ll have.” While that situation was super harrowing, it gave Russin the time to complete his great new sophomore release. Life In Not A Lesson starts off huge, right out the gates. Like a kind of hardcore punk Guided By Voices. Then as the record moves along it starts to open up some. Synths take the place of the buzziest guitars and the picture that Russin is trying to paint becomes infinitely clearer.

“This is the most conceptual record that I ever made but it wasn’t intentional,” Russin explains. “I didn’t really have a theme for the whole thing but there was this idea that kept getting narrowed down. It wasn’t something I set out to do. When the songs started coming together this idea seemed to happen unintentionally and it really seemed to flow in a way that furthered the arc and “Life Is Not A Lesson” the song, was the climax to it all. It became this kind of journey or whatever kind of cliche that I can throw in here,” he laughs, “and this seemed the logical end. A lot of stuff I write can come off nihilistic and pessimistic but I don’t mean these things as inherently negative or positive but there was this moment of optimism in that song. I wasn’t painting a happy picture with the story that I wanted to tell but when the record was done it was.” When Russin is writing he tends to try to not get too ahead of himself. “I jot down lines and hope to figure them out later and in the process of writing, take some of these things and write a whole song from there. I’m not a fan of trying to fit lyrics onto something that they weren’t written for. I’ll use these pieces to attempt to have a starting point and then move on from there.” Specifically for the title track of the record, Russin found it was something that he liked in the moment but then was curious later if it made any sense but it ended up tying the whole album together.

“I’m a person who enjoys records listening to a full length album, I like to think about the placement of songs. I write a song and think this is a song that could potentially be the first song, it sets the mood the way I want it too. When I’m going through the process I like looking at the record as a single artistic entity. Something that will be diverse and that often comes from the dynamic range of the songs. I’ll sit back and go through the songs and I’ll notice that I have like three songs that are heavy fuzzy guitar songs and then some more that are slower and I look at them all and think how do I make this feel like a record.” This thought process gives you a great insight into how Life Is Not A Lesson can go from the howling guitar based opener “Bodies” to the beautiful synth-y instrumental “Birdsong”. “ I love super loud guitars,” Russin says with a chuckle. “It’s hard for me to stop recording when there is a ton of feedback ringing out but in the moments of looking at the bigger picture, there was a lot of experimenting and trying to write a song in a totally different way.” One of the more interesting songs on the album is the track “How A Song Should Go” which is all about the ups and downs of writing a song. Russin sings, “I’ll never know/I’ll never know/Just how a song should go” and from there explores the reason in which to actually write a song. “I love songs that talk about songs. I love anytime songwriters sing about writing lyrics and it’s something I’ve enjoyed doing from time to time. The first lines of that song came and it could’ve been one of those things where I just would’ve pivoted but the mood I was in at that time, it just kept going that way. I don’t know if it was being burnt out by not leaving my basement for a month in a very uncertain moment but it was one of those nice moments that found its way.”

There are a ton of these nice moments scattered throughout the running time of Life Is Not A Lesson and they are all worth taking the time to discover. “When I’m listening to music I’m always hearing these moments where I think, ’How did they do that?’ And when I hear those moments it always gets me really excited. To me writing music is the best part about music,” Russin says,“to be completely involved in that is the closest thing that I have to spirituality, except it doesn’t feel otherworldly but comforting.” During these times a little comfort can go a long way and the new Glitterer album, Life Is Not A Lesson, is just the right amount of comfort we can hope for.

Pre-Order Life Is Not A Lesson by Glitterer HERE