“Giving Up The Ghost” Guy Blakeslee

Multi-artist Guy Blakeslee, recently released his new solo LP Postcards From The Edge via his own Entrance Records & Tapes earlier this month. The full-length was recorded in New Orleans at the house studio of Preservation Hall Jazz Band with producer Enrique Tena Padilla (Oh Sees, Wand), the album is the latest from psych-rockers The Entrance Band. Today, Blakeslee, has shared a video for “Giving Up The Ghost,” filmed by Lael Neale.

“I wrote this song on a friend’s antique organ in Paris in the last days of 2016,” Guy notes. “The idea began to form as I stood, statue still, in a state of shock, hypnotized by the ephemeral light and shadows dancing on the gravestones in Pere Lachaise cemetery on the eerily quiet morning after the presidential election. Back home, everyone I knew was in mourning for a world that had never really existed. A few days later Leonard Cohen died. The ghost of America, as seen from afar, seemed like a delusional myth, and I was taking refuge in the unknown sanctuary of a foreign city, vanishing in the wake of a rude awakening.”

Years later, Blakeslee teamed up with producer Enrique Tena Padilla and recorded the album in New Orleans, at the house studio of Preservation Hall Band. “After our nightly walk around the empty streets of New Orleans, we came back to the studio and listened to the demo of ‘Giving Up The Ghost,’” notes Padilla. “A flash of intuition showed me the image of a ghost trapped on a radio wave, as a portrait of the overall emotion: an inescapable scenario that could be resolved only by the cloudy but uplifting melody that Guy introduced later in the song as a counterpart. A constant kick marked a heartbeat out of an Edgar Alan Poe story. The lyrics got quickly lost in this sort of Lynchian soundscape. But, due to the magic of the time and the presence of Guy, the song translated to a perfect balance between excruciating conflict and the wonderful release of a choir of angels, coexisting in the intangible space of music.”

Blakeslee has also announced plans to release Double Vision on March 5th, also out via his Entrance Records & Tapes. The instrumental album was recorded in the spring and summer of 2020, following a March 13 accident where he was hit by a car. He was left with a brain injury that made him see double until late autumn and the music found here played a role in his healing process. The album will be available via all DSPs and a limited edition tape will be available exclusively through Bandcamp. Look for more on Double Vision soon. 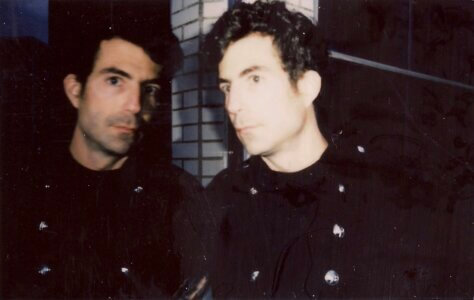