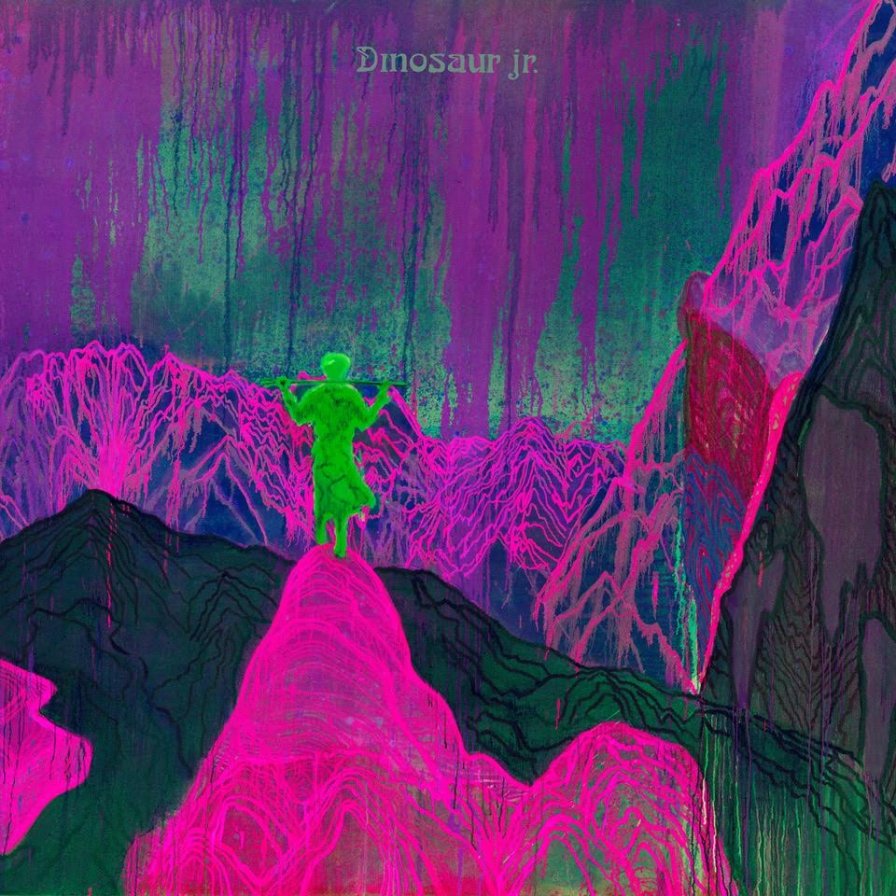 Give a Glimpse of What Yer Not

The promotion campaign behind alt-rock legends Dinosaur Jr.’s newest album, Give a Glimpse of What Yer Not, has been strange. The record was first announced in a YouTube video by former Black Flag singer and lifelong devotee Henry Rollins, his face affixed with a huckster’s grin as he notes of the set, “like every other Dinosaur Jr. record, it is fantastic!”

A video for first single “Tiny” features a super cute skateboarding bulldog riding around a concrete park, but the modern day pup’s appearance is seemingly also a throwback to the jowly mutt that appears on the artwork for the Massachusetts unit’s Whatever’s Cool with Me compilation from 1991. In a move that’s both comical and cynical, they then comped together all of six-stringer J. Mascis string-bending solos from the new record into a near seven-minute audio montage for Spotify. The famous shredder was also recently in an advertisement for a Converse shoe sporting a built in wah-wah effect. With all these recent stunts, it begs the question: what exactly are Dinosaur Jr. offering us in 2016? Gimmicks aside, it’s basically more of the same.

There’s something nobly efficient about the band, who have been on a prolific tear since reforming with their original lineup in 2005. What’s notable, though, is that Give a Glimpse of What Yer Not is their fourth album since the comeback, meaning they’ve now officially produced more music in their second phase together than they did in the ’80s. While there’s certainly plenty of power put into full throttle rockers like opening number “Goin Down,” the formula is starting to show wear-and-tear.

Starting with the high points, the aforementioned “Tiny” continues the band’s travails in poppier alt-rock territory, mostly driven by Mascis’ fuzz-flecked major key chords and his sunny, though still characteristically sleepy singing voice. “Good to Know” is a sadder-sounding, though no less fist-pumping piece that hearkens back to the crunchy early ’90s work of Where You Been.

Album highlight “Knocked Around” first finds Mascis using a lonely, fragile falsetto over a slight shuffle, but the song cascades into a juiced-up back end, the band choosing to fight for love with a series of rumbled toms and, naturally, string-screeching solos.

While Give a Glimpse of What Yer Not’s stronger moments conjure nostalgia, its lesser songs hover in a fog of ill-defined mediocrity. With over a hundred album tracks in their catalogue, the mild-mannered “Be a Part” won’t stick around in your memory as well as career highlights “Feel the Pain” or “Little Fury Things.” Mid-tempo misses “Lost All Day” and “I Told Everyone” are likewise filler. None of these are especially awful, they just have an auto-pilot vibe to them.

More egregious is the mud-thick, ’70s rock vibe of “I Walk for Miles.” Though to be fair, the goofily chunky riff does let Mascis go especially wild, basically freestyling a series of fretboard exploring sounds for two-and-a-half-minutes.

Perhaps the best gauge of a new Dinosaur Jr. album are its contributions from bassist Lou Barlow. Famously stifled by the band in the ’80s, he’s managed to sneak a song or two onto their last handful of releases. This time around, he delivers two songs: “Love Is…” and closing cut “Left/Right.” The former possesses a psych-country feel that mixes mondo distorted bass, gentle acoustic strums, and Barlow’s musings on a nature-vs.-nurture situation. The latter is a heart-wrecker that sounds like it could’ve worked perfectly on his Sebadoh’s Bakesale. So, two for two, in that regard.

Give a Glimpse of What Yer Not isn’t so much bad as it is disappointing. The most fervent of Dinosaur Jr. fans will no doubt put it in rotation, while some may simply throw its best songs onto a playlist with the band’s other hits. If even that’s too much for you, there’s about seven minutes of sick soloing to sit with on Spotify.