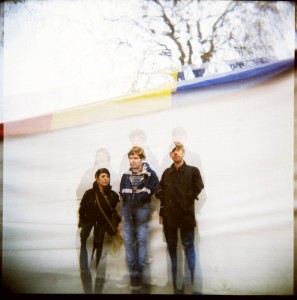 Girls Names release a new remix album titled The Next Life on October 29th featuring spots by Factory Floor and David Holmes as well as their interpretation of Brian Eno’s “Third Uncle” that premiered a few weeks ago on Slumberland Records.

“The New Life” video was directed by Dan Tombs (Aphex Twin, Factory Floor) in a single shot with Sarah Lewis providing the performance being captured. Frontman and chief songwriter, Cathal Cully, mentions of the videos direction:

“The whole conception, development and recording for The New Life was as insular as it gets but once documented and released to the world at large I’m very much of the opinion that you should give the songs their own legs and see where they go. This is why we’ve been very open for visual collaboration with previous videos and artworks and with the forthcoming remixes which we shall be releasing. Having been a fan of Dan Tombs’ previous work we were more than happy to leave him to his own devices. The New Life now in this format is no longer so insular. Dan’s direction and video manipulation coupled with Sarah Lewis’ performance, marry the hypnotic repetitive riffs and drum beats to a perfect jittering, hypnotic visual identity of it’s own.”

The band have also been nominated for the Northern Ireland Music Prize for their outstanding second album The New Life that came out in February of this year. The album marked a new era for the band and awarding critical acclaim from both sides of the Atlantic. The album has also been nominated in Drowned in Sounds’s Alternative Mercury Music Prize – “The Neptune Album Prize