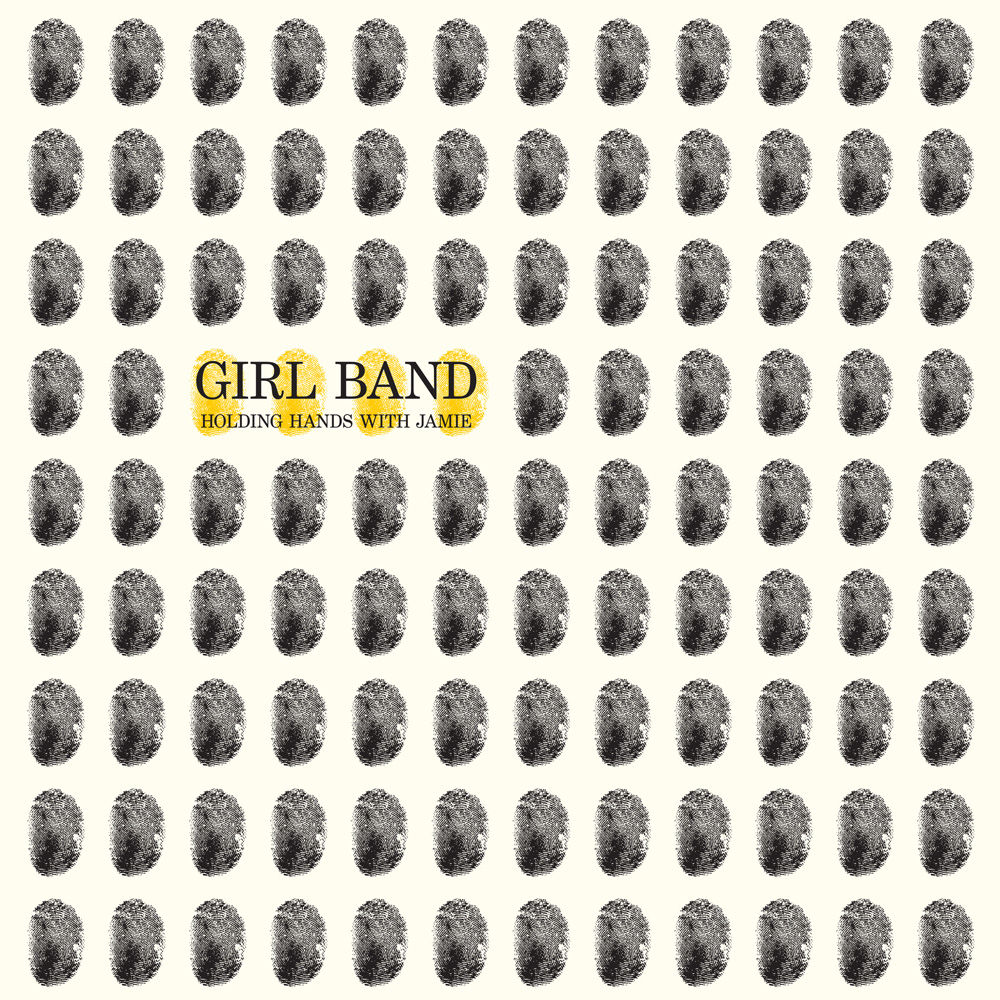 The unsuitably named Girl Band is a group of four guys from Dublin, Dara Kiely on vocals, Adam Faulkner on drums, Alan Duggan on guitar and Daniel Fox on bass. Having put out some singles, some demo compilations and an EP over the years, the band is set to release their debut LP, Holding Hands With Jamie. While the LP’s title may have you thinking this is just another run of the mill indie-pop band, don’t let it fool you. These guys are producing some of the most tense, abrasive and energetic music in years; somewhere between the sound of Daughters and Big Black, Girl Band is a band to watch.

The first track, ‘Umbongo’, starts off with an edgy guitar line and lurching drums before breaking into hammering machine gun drums with haunting and chaotic vocals. The next song is the single ‘Pears for Lunch’, which features some of the most tense, angry and energetic vocals about bananas that I have ever heard, backed by instrumentals that only grow more tense before exploding into chaos. ‘Baloo’ is a little less edgy, but it’s hard to get away from that feeling with Girl Band. It’s a little quieter, and sounds somewhere between an awkward dance jig and a busy train station.

The next track ‘In Plastic’ lets the listener relax a little bit, with a sort of dreamy and noisy number; featuring a melancholic waltz-y vibe and some quieter, less chaotic rhythms. The next track up is the single ‘Paul’, at this point you know that your time to relax is long gone, with tense drums opening the track and vocals reminiscent of a lunatic yelling through your door at you before breaking into chainsaw like riffs and vocals that sound like a tormented ghost. Up next is the fast-paced track ‘The Last Riddler’, the song moves along at a blistering pace with the vocal ramblings of a mad man before coming to an abrupt halt.

‘Texting an Alien’ starts out a bit misleading with calm and almost bright guitars, before putting you back on edge as the drums come in and the tension just keeps getting amped up and up. The close to 8-minute epic ‘Fucking Butter’ follows up, this track is akin to the first climb of a rollercoaster, but instead of letting you drop they give you an incredibly edgy but enjoyable rant about sandwich spreads, before letting the track slow to and end without the huge outpouring of insanity you were expecting. The final track ‘The Witch Doctor’ is a wild ride of chaotic noise, with the continuous pummeling of the album’s drums accompanying the chaotic vocals and guitars into a mess of noise.

Girl Band’s album isn’t perfect, the odd track on it can drag on, but no album’s perfect. The thing that makes the album truly shine, is its energy and tension. I haven’t been this pumped up and on edge from an album since Daughters’ self-entitled, Cloud Nothings’ Attack on Memory or Mastodon’s Crack the Skye, and frankly, if this album didn’t make some of the year’s top album lists, it would be a mistake.