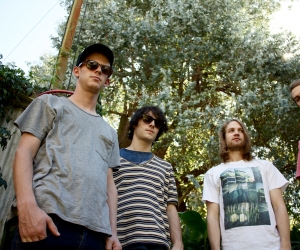 After sharing the jangly garage pop of “Here She Comes” off their forthcoming debut full-length, Ages, last month, Ghost Wave reveal their second single, “Bootlegs”.  Flying Nun Records (The Clean, The Bats, The Chills) will release Ages on August 27th in the U.S.. Ghost Wave’s Ages is the first new release since Flying Nun announced their partnership with Captured Tracks in America.

Ghost Wave’s sound sits perfectly between the Flying Nun bands of the ’80s, the British explosion of the ’60s and the wayfaring dubs of Lee “Scratch” Perry.  Ages was recorded and self-produced in various studios around Auckland, New Zealand in six days. Thomas Bell (The Clean – Getaway) engineered and mixed the record. In describing their new record, Matthew L. Paul notes that it is a departure from the sunny sounds of their debut EP: “There is a kind of amphetamine-like feel to this record. I think, in terms of the way the songs are played, we were less interested in loud/soft and wanted to create a mechanic type sound and song-presence.”