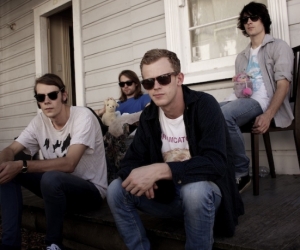 Ghost Wave’s sound sits perfectly between the Flying Nun bands of the ’80s, the British explosion of the ’60s and the wayfaring dubs of Lee “Scratch” Perry. At its inception, the brainchild of Matthew L. Paul, Ghost Wave was a project relegated to a small room in Auckland, New Zealand. Paul, along with collaborator Eammon Logan, self-recorded what became their self-titled EP; a collection of sunny and warped songs characterized by jangly guitars underpinned by motor-style rhythms and a unique melodic sensibility.

With some early praise in their pockets, Ghost Wave traveled to the U.S. for shows in New York (including CMJ) and Los Angeles. They returned to the states several months later for appearances at 35 Denton Festival and SXSW; showcasing new songs along with an updated live configuration.

Ages was recorded and self-produced in various studios around Auckland, New Zealand in six days. Thomas Bell (The Clean) engineered and mixed the record. In describing their new record, Matthew L. Paul notes that it is a departure from the sunny sounds of their debut EP: “There is a kind of amphetamine-like feel to this record. I think, in terms of the way the songs are played, we were less interested in loud/soft and wanted to create a mechanic type sound and song-presence.”

Recently, Beck’s approached Ghost Wave about participating in their Record Label Project. As a part of the project, Beck’s hired designers to create multiple album cover artworks as well as to create an Edison bottle using a Beck’s beer bottle, which was inscribed to play Ghost Wave’s single “Here She Comes” like a 19th century phonograph cylinder. The fascinating video of how the bottle was made can be watched here. Beck’s has a 25-year history supporting musicians and artists alike with their Art Labels Project, which has employed the talents of Andy Warhol, Yoko Ono, Damien Hirst, M.I.A. and Kid Cudi amongst many others.

Ghost Wave just wrapped up New Zealand tour dates with The Black Angels. They will return to the U.S. around the release of Ages for a full tour including performances at the CMJ Music Marathon. Stay tuned!