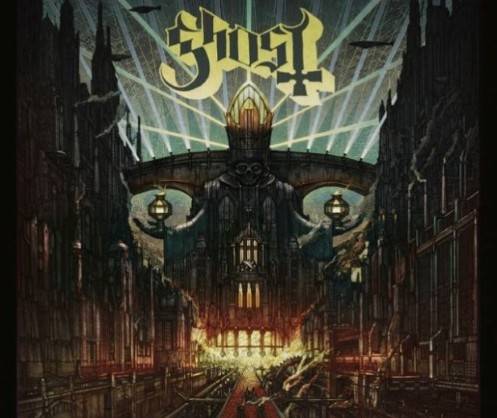 Ghost today announced the arrival of “Majesty” from their forthcoming third sacred psalm, Meliora. Meliora is due out on August 21st on Loma Vista Recordings and is the follow up to 2013’s heralded INFESTISSUMAM.

“Lyrically, it’s on one hand a hymn about the dark lord of the underworld. On the other hand it paints a picture of a swarm of people, whom in a world of complete disaster, idolizes an authority that is clearly looking down upon them. How to love something that hates you back.” – A nameless ghoul, regarding “Majesty”.

Papa Emeritus III and his nameless ghouls will return to North American to deliver their satanic melodies to audiences across the continent this fall for their ‘Black To The Future’ headlining tour. The procession begins at The Fillmore in Washington, DC on September 22nd. See below for a complete itinerary.
Ghost released their second album INFESTISSUMAM on April 16th, 2013 via Loma Vista Recordings. The 10-song offering was produced by Nick Raskulinecz (Queens of the Stone Age) in Nashville, TN In November of 2013, the band released If You Have Ghost, a five track EP recorded and produced by Dave Grohl, including cover versions of songs by Roky Erickson, ABBA, Army of Lovers, and Depeche Mode.