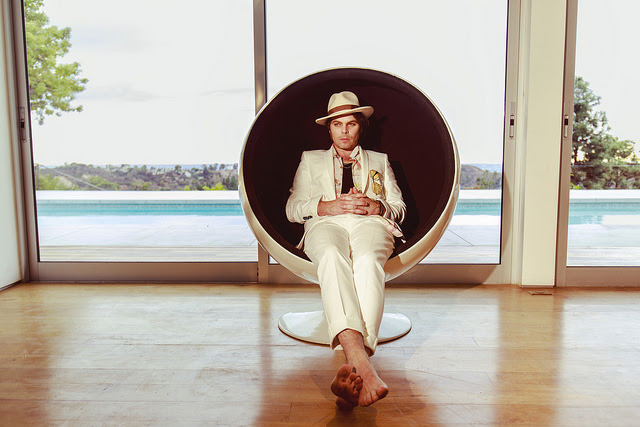 Former Supergrass singer/guitarist Gaz Coombes spends his third solo album World’s Strongest Man wondering what it means to be a strong man in 2018 and how to free oneself from entrenched clichés of masculinity. He looks inwards at himself to examine the masculine clichés he lives as a father, husband, and son. But he does so with some self-deprecating humour.

Coombes has invented a nocturnal world of his own with lush synths, violins, pianos, and buzzing electric guitars on World’s Strongest Man. Northern Transmissions asked him about the album’s wide-ranging influences – Grayson Perry’s book The Descent of Man, Frank Ocean, the British woodlands, and California weed – being open about his own vulnerabilities, and more.

Northern Transmissions: So many influences went into the making of World’s Strongest Man. Would you say the strongest influence was The Descent of Man? How did you come across that book?

Gaz Coombes: I wouldn’t say this was the strongest influence. I look all around me for inspiration, so this album is a snapshot of my head space over the last two years. My wife works in a book store and came home with The Descent of Man one day. It’s a brilliant read, full of enlightening insights and thoughts on how to free oneself from traditional male clichés. Grayson writes about the conflicts and contradictions of masculinity but in such a non-judgemental and eloquent way. It definitely had an impact.

NT: You were half-done making the album before you read The Descent of Man. When you finished the book, did you rework any of the songs?

GC: Not really. I think it inspired the album title most of all. The way the cover image works with the title was a concept I started playing with after reading the book. And the book definitely helped inspire a few lyrics in tracks like “Walk the Walk” and “Wounded Egos”.

NT: You’ve called World’s Strongest Man “a lighthearted poke” at yourself and modern men. Was it difficult to avoid getting too serious in condemning toxic masculinity?

GC: It’s the title-track “World’s Strongest Man” rather than the album itself that is a playful dig at my own quirks and vulnerabilities, not about toxic masculinity. It’s thoughts and contradictions on dealing with my own weaknesses. And I prefer to not be too earnest about that. We’re all flawed in some way, so if putting it into my art helps balance me, then that’s a good thing.

GC: He’s a great artist, a master of the subtleties and creating space in music. I’m a big fan.

NT: What about California weed and British woodlands? Did you write a lot of World’s Strongest Man in California or while tucked away somewhere in a remote part of Britain?

GC: I visited California quite a few times during the making of the record. Those times definitely had an impact on the mood and visuals of the album.

GC: Hard to say. When you just live day to day, and especially in this weird job, it’s hard to separate states of mind. I guess highs and lows are an inherent part of being an artist. I feed off them both equally. Since I lost my mother when I was 27, I’m way more exposed to anxiety and low-level depression. It definitely amplified thoughts of my own mortality and opened an unwanted door. But I’m lucky to have a great family around me. There’s always support, and I’m way more comfortable now with being open about this stuff.

NT: On the album, you take aim at world leaders and celebrities. Do you think it’s inherently bad that celebrities can and do become world leaders, like Donald Trump? There are also rumours that Kanye West, Oprah, and The Rock will run for president in the next election.

GC: [Laughs] Well, it’s supply and demand, man. Nothing would surprise me. The media and The People just need to stop feeding it.

NT: I like the fact that you shot the video for a song called “Deep Pockets” on a shoestring budget. Do you still have many (or any) blurry, fast-paced nights filled with a spinning roulette wheel of faces like the one shown in the video?

GC: It’s all inspired by different weird moments in my life. Thankfully, nights like this still do happen.