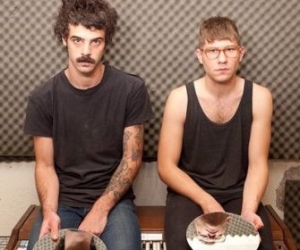 Gauntlet Hair have shared their latest single, “Bad Apple,” The band also recently released a video for “Human Nature.” Directed by Ryan Ohm (Twin Peaks, Brothers in Law), the video’s dark imagery heightens the murky intensity of the track. Filmed in Chicago, the ominous clip features drummer Craig Nice and singer/guitarist Andy R. partying – or could they be celebrating? – in an apartment while the storyline flashes back to seedy adventures.

Gauntlet Hair’s second album, Stills, will be released July 16 on Dead Oceans and is available for pre-order today at SC Distribution, iTunes, Amazon and your local record store. Recorded during Portland, Oregon’s grey winter days in producer Jacob Portrait’s (Unknown Mortal Orchestra) appropriately named studio “The Cave,” the album reveals Gauntlet Hair’s guileless affection for the goth industrialists and post-punks who blazed a shadowy path through the 80s and 90s.  Gauntlet Hair will also be touring North America this summer, with stops along in the Midwest, Canada and along the East Coast. A full list of dates is below.