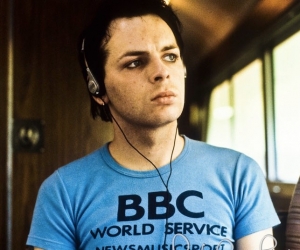 Electro and industrial music pioneer Gary Numan will release ‘Splinter (Songs From A Broken Mind)’ on October 15th 2013, his first new studio album in over seven years. A long-time advocate of artist independence, ‘Splinter (Songs From A Broken Mind)’, will be released on Numan’s own label Machine Music. Numan co-produced his 20th studio album with long-time collaborator and producer Ade Fenton and also features some sublime guitar work from Nine Inch Nails guitarist Robin Finck. The album was recorded in England and completed at Numan’s home studio in Los Angeles, California, following his permanent move to the US at the end of 2012.

‘Splinter (Songs From A Broken Mind)’ is Numan’s first full-length studio album since 2006’s ‘Jagged’, but the seven-year wait between albums was not something Numan intended. After the critically acclaimed reception of ‘Jagged’ he planned to swiftly follow-up the album with ‘Splinter’; having announced the title of the record many years ago as his next project. But plans for the release of the album constantly changed as Numan went through phases where he found it impossible to write due to a crippling lack of self-confidence brought on by severe bouts of deep depression. Despite this dark time Numan continued to tour, including being personally invited by super-fan Trent Reznor to join Nine Inch Nails during their set to perform several of his own songs including ‘Cars’ and ‘Metal’, which NIN had previously covered, on the band’s 2009 ‘Wave Goodbye’ tour. Numan also managed to co-write the single ‘My Machines’ with Battles, and Numan’s music continued to stay in the spotlight thanks to bands such as Jack White’s The Dead Weather covering the classic ‘Are ‘Friends’ Electric?’. For all his success over the years, Numan has never felt confident of his talents and during the making of ‘Splinter’ he would constantly throw out ideas and start over again and again. But Numan wasn’t only contending with completing new music, his personal life was full too, with a much publicised move to a new home in Los Angeles with wife Gemma and their three young daughters.

Numan’s permanent relocation to the US reinvigorated his creativity and had an immediate positive effect, with ‘Splinter (Songs From A Broken Mind)’ eventually being finished in his LA studio at the start of 2013. The album features 12 tracks ranging from the classic Numan melodies and vocal delivery of ‘I Am Dust’ to slower velocity anthems such as ‘Where I Can Never Be’ and the orchestral strings of ‘The Calling’. Carefully curating the talents of guitarist Robin Finck to add a rich, eastern texture on several tracks, Numan ensured that ‘Splinter’ is most definitely an electronic album. Right from the start, it’s thrilling to hear Numan’s voice-almost unchanged from his early years-set against a backdrop of cold, dark electronics. And there’s both a real edge and sense of urgency to the new material, in the whiplash choruses and thundering bass lines of ‘Everything Comes Down To This’ and ‘Love Hurt Bleed’. There’s also a lingering sense of pain and isolation. ‘My Last Day’ and ‘Lost’ are two of his finest songs, an aching sense of loss communicated with a signature directness showcases his unique writing capabilities. Whilst ‘We’re The Unforgiven’ and the title-track en-rich the sound with weird hooks and Arabian riffs in a dark escapism from some of the more personal lyrics on the album.

‘Splinter (Songs From A Broken Mind)’ will be released in North America on 15th October with tour dates beginning in August through to November, including appearances as the special guest on the upcoming Nine Inch Nails arena tour at the personal invitation of Trent Reznor.

Track listing for ‘Splinter (Songs From A Broken Mind)’: