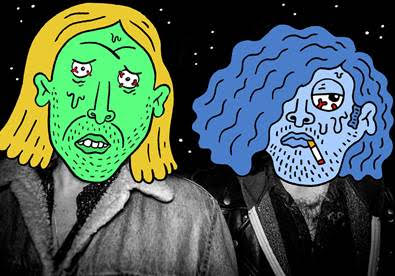 Love Buzzard have released their brand new video for ‘Superglue’, directed by Will Robinson of Will Television and artwork by Dalston based illustrator Russell Taysom.

After playing over 150 gigs around the UK in the past 3 years and supporting the likes of Cerebral Ballzy, Slaves, and God Damn, garage rockers Love Buzzard are finally ready to unleash their debut album. Available on special edition vinyl, via Sean McClusky’s legendary punk label 1-2-3-4 Records, home of The Buzzcocks, Arrows Of Love and Bad For Lazarus amongst others.

Love Buzzard have taken their fuzz laden guitar lines, screeching vocals and soul splitting drums to the next level with ‘Antifistamines’, merging disco beats with garage-surf riffs and the pop sensibilities that come so easily to frontman Kevin Lennon.

After founding Fluffer Records, drummer Al Brown has been responsible some of the liveliest, loudest and most ambitious events and releases East London has seen, and that do or die DIY ethic was what first caught the attention of Sean McClusky at 1-2-3-4 Records.

The LP is available on limited edition 12” vinyl illustrated by Dalston illustrator Russell Taysom. The release will also feature bonus material not included in the CD version.

Love Buzzard play The Shacklewell Arms in celebration of their upcoming single, ‘Superglue’, on Dec 6th.