Future Feats gets off on the right foot

Future Feats' debut single is powerful pop with a twist.
Share on TwitterShare on PinterestShare on PocketShare on RedditShare on FacebookShare on Email

Before starting Future Feats, lead singer and songwriter Josh was at one of the toughest points in his life. His substance abuse was reaching a head and he was facing problems his wife that would eventually lead to their separation. He was left drifting while trying to break into the business and make the trek to LA. Josh doesn’t sugar coat this period in his life — for him, it’s essential to understanding the newest chapter in his songwriting career.

The band’s first track from their upcoming debut album, “Cities in Wonder,” takes all of this life experience and synthesizes it into pitch perfect power pop. It’s an unexpected take on a difficult period, and a strong first impression for a band just getting their start. In conversation, Josh tells us about how the single was written, his biggest inspirations, and what we can expect from the upcoming LP.

NT: Let’s talk about the name Future Feats. What does it signify for you?

J: Well, about five years ago I was a songwriter — well, I’ve been a songwriter for a really long time, I just hadn’t gotten the winning formula. About five years ago I wanted to start over and create this project that I could really take forward and actually follow through with all of the things that I’ve been attempting to do. I just kind of came up with the idea. I was walking around my big old oak tree in my front yard on the farm here in North Carolina. I don’t know — it’s not really about making it as an artist, it’s really about just making it to tomorrow. Taking it day by day, making it through each day, and trying to be as positive as possible. That’s what Future Feats means to me.

NT: From what you’ve written, it sounds like a lot was happening in your personal life during the recording of the album. How did that inspire your music?

J: I think this iteration of my songwriting is the most honest. All the songs that I’ve written for the album and all the ones we’ve recorded so far, they all have a story about my real life. Before I was just a songwriter, just kind of not writing things from experience all the time. It wasn’t until I went to write “Cities in Wonder” that I had to take a really hard look in the mirror and start drawing from my actual personal experience to continue these stories, and to continue to make music it had to be real.

NT: What was happening to you and what’s reflected in the lyrics to “Cities in Wonder,” it’s serious subject matter, but the song itself sounds very energetic and positive. How did that come to be?

J: Well, I love pop music, but I also was really going through a tough time, and the juxtaposition of that really helped me to get this off my chest and be really honest and straightforward with how I was feeling at the time. Going back to that remaining positive thing, I wanted to try to remain a little upbeat and create something that would make people happy when they hear it. But you take a closer look at the lyrics and you go, ‘okay, maybe there’s another meaning behind all of this.’

I was crashing on a friend’s couch in Chicago and writing songs, working with a producer out in Chicago, and I actually called my manager because I was having a really tough time with this song, and I was having a tough time in general — I felt like I was out of songs. And Robert, my manager, metaphorically and actually talked me off the ledge. He told me to sit down, just start writing, asked me ‘what are you doing right now?’ And I said, ‘just looking out at the Chicago skyline.’ And he was like, ‘what’s going on? Talk about that, start writing about that.’ So that’s kind of how “Cities in Wonder” developed, and after I wrote that song, that’s how a lot of other songs followed for the album.

NT: It seems like Future Feats started as a solo project and it became a band over time. How did that happen?

J: I’ve been through multiple roster changes for this project. We were in Chicago for a while and I played a bunch of dates in the Midwest, and I found a bunch of guys out there who wanted to be a part of the project. I kept writing music and I wrote a song called “27,” and that was the song that helped me land a publishing deal and a record deal. After that, I picked up and moved to Los Angeles, and found some other players in LA that wanted to be in the band. Really, it’s just been me going through life and finding people and asking, ‘hey, do you want to be a part of this?’ Finding people that I enjoy being with and that are great musicians. Thankfully I’ve found a lot of those people that are willing to be in the band.

NT: What are your biggest inspirations, both musical or otherwise?

J: I would say my life is the biggest inspiration, just because I wanted so desperately to get how I was feeling and all these things out onto recording, somehow. I needed to find a way to do that, and this was just another outlet. I would say my life experiences, and a lot of the things that led me during that time is my main influence, is my main driver. Without getting into too much detail.

NT: You’ve written that music is your “entire being.” What do you mean by that?

J: I mean that it’s all I want to do. Among all these good things and bad things that have happened, it’s been the only real thing that has staying power, it’s the only consistent thing in my life. I was married for a while and that ended, and that was a really big turning point in my life, but music was always there, it always kind of stuck around. Now I’m about to release an album, and this is all I’ve ever wanted. I’m getting an opportunity to do it. Music is my entire being, it’s all I want to do, I just want to write songs. Whether I’m the artist or whether I’m behind the scenes, I always want to write songs — forever.

NT: What can listeners expect from your upcoming album?

J: I think it’s a very exciting record, I think it tells a story — from start to finish, it’s a concept record about my life and about a bunch of the things that I went through. I tackle a bunch of genres that I’ve always wanted to tackle, musically and stylistically. I had a great time making it, and I think people will have a great time listening to it. 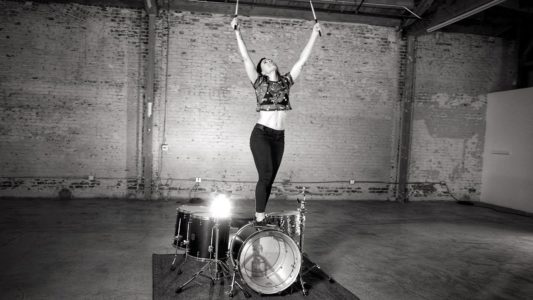