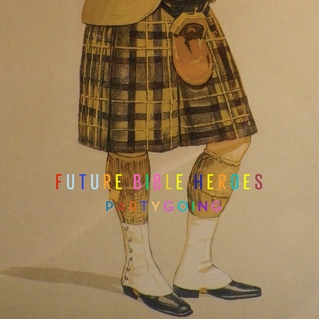 Directed by Naomi Yang (of Damon and Naomi), the video features Claudia, Stephin, and Chris frolicking at an unconventional garden party. While the video showcases the summery feel of the song, its atmosphere also includes a hint of ambivalence about parties in general, just like the song itself.

The live ensemble will consist of Claudia Gonson, Shirley Simms, Christopher Ewen, and Anthony Kaczynski. Stephin Merritt will be unable to join these dates due to ear issues.

Future Bible Heroes is one of the musical projects from the Magnetic Fields’ Stephin Merritt, who writes all the melodies and lyrics for the band. His longtime friend and collaborator Christopher Ewen composes the instrumental backing tracks. Joining Merritt on lead vocals is the Magnetic Fields’ Claudia Gonson. Their multi-disc catalog compilation, Memories of Love, Eternal Youth, and Partygoing, marks the first time the entire original Future Bible Heroes catalog is available in one place. In addition to the three full-length albums, the CD collection includes a fourth disc that compiles the band’s three EPs—The Lonely Robot, I’m Lonely (And I Love It), and Lonely Days—plus several tracks from outside compilations. The LP collection includes each of the three albums (Memories of Love, Eternal Youth, and Partygoing) on vinyl plus a download card containing all three LPs plus the EPs and compilation tracks.