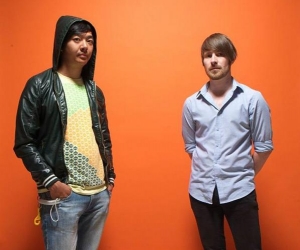 As the opening track on the album, “Brainfreeze” acts perfectly as a portal for the headlong rush into Fuck Buttons’ viciously seething mix of industrial beats and spitting electronics. It holds together on its own merits too, though; a rumbling, viscous brew that swarms over every space within its recording. “Brainfreeze” hooks the listener in with its rolling groove and then buries them under a mass of sound akin to layers of 80’s sci-fi music, piled on top of each other and then pulled apart in order to make a coherent pattern.

“Brainfreeze” will be released on a limited edition clear-vinyl 12” single (2,000 copies worldwide, each including a download code) and as a 2-track Digital Download single on October 8 via ATP. Both formats will include the full 8-minute version of “Brainfreeze” as well as a brand new additional track called “Royal Flush”.

After a busy summer of UK and European festival shows, Fuck Buttons are now set out to promote Slow Focus in full as they embark on their much awaited North American Tour this October. Full list of dates below.