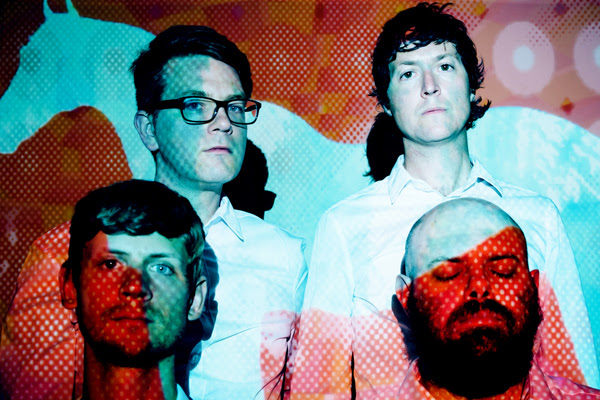 Fresh Snow recently released their their latest musical offering “Won” via Hand Drawn Dracula. This week they share their video for “King Twink Rides Again.” The video is available to Stream via YouTube.

Fresh Snow have moved in new directions. Born in a dive bar on Toronto’s Bloor Street in 2010, four friends gathered to make improvisational music based on their love of drones, noise and-less obviously-strongly melodic pop music. Since their first show in 2011, Andy Lloyd (bass, keys) , Brad Davis (guitars, keys), Jon Maki (drums), and Tim Condon (keys, etc) have released a split 7″ single with METZ, a full-length album, “I” (Reel Cod Records), and a cover of ‘Frances Farmer Will Have Her Revenge on Seattle’, featuring vocals by Julie Fader on the Nirvana tribute album, Milkin’ It (Hand Drawn Dracula).

Primarily an instrumental band with a core line-up augmented by guest horn and string players (including Trent Severn’s Laura C. Bates), Fresh Snow is not easy to pigeonhole. Their upcoming
WON will explore different sides of the band’s aesthetic, and features vocal appearances by
DIANA’s Carmen Elle, and FUCKED UP’s Damian Abraham. Just as they are prone to wearing masks onstage, so they are intent on keeping listeners guessing what they’ll do next. In an age where everything is instant and people have nothing to hide, Fresh Snow believes that a little mystery makes everything more enjoyable.