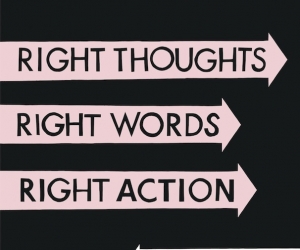 A lot has changed since Franz Ferdinand cropped up back in 2004 with their sharp suited, suave take on post-punk and with four years between albums, to have the Glasgow boys back on the scene after a long hiatus feels peculiar. Not that it should matter if the four piece “fit in” anymore but with most of their peershave either floundered into obscurity or completely dissolved, encountering the torchbearer of indie-rock circa the mid-noughties smacks of a nostalgia.

The Scottish quartet have returned with their fourth LP, Right Thoughts, Right Words, Right Actions and like any band that have been out of the limelight for sometime coaxing themselves back into the game Franz have gone straight for the whipcracking approach with a record that is short, sharp and swift. Akin to trying to keep a relationship fresh after being together for years or hooking up again with a past suitor, recognizing the foursome’s “moves” to try and usher you back as a listener are all too predictable. Listening to Right Thoughts…it’s hard to denote whether this is a band recording from way back when or if it’s a cut from their latest effort. Ultimately there’s very little in the way of evolution. The angular post-punk of yore has morphed into a stunted schlep through tepid funk, opening track and almost title song ‘Right Action’ is testament to this. Notably the standard tricks of the trade for Franz are in place too, ‘Brief Encounters’ is a tale of suburban normality inter-spliced with wife swapping. “We all lose our keys/we all choose our partners/we all choose our car keys” is “risqué” notion akin to the homo-erotic ‘Michael’ from the band’s debut. Instead of sounding raunchy, the track just appears formulaic and tired. ‘Fresh Strawberries’ conveys frontman Alex Kapranos’ as a pompous wordsmith with a profound vocal style that is irritating in the way the vocalist pronounces the fruit in the song’s titles. Intriguingly if you focus on the lyrics, the band seem to be referencing the passing of time and how things can soon pass their expiration date. “We will soon be rotten/we will all be forgotten” appears to mimic the shelf life of Franz and their now defunct comrades

The group’s fourth outing isn’t a complete non-starter though, amongst the standard Franz templated format, ‘Love Illumination’ is a scratchy, blues flecked strut that bounds along like an excited puppy, ‘Bullet’ is a jerky, jangle drenched hip shaker propelled by Paul Thomson’s vibrant drum licks, while ‘Evil Eye’ is a staccato swagger-a-long with a blunt guitar riff making up the song’s back bone. These ditties might act like the nibble on the ear or the cheeky squeeze of the bum but there’s no doubting the Scotsman’s schtick has gone stale over time.

The reoccurring theme of finality crops up throughout Right Thoughts…if the aforementioned ‘Fresh Strawberries’ hints at the egg timer running out of sand, closing track ‘Goodbye Lovers and Friends’ is like the farewell note on a lovers pillow after one final fling. Kapranos starts the track with ironic mentions of how he “hates pop music” and he doesn’t “wear bright colours”. From a band that professes to love pop music and bear day glo clothes, the tongue is firmly in the cheek here. But it’s when the lead man announces ‘goodbye lovers and friends/so sad to leave you/when they lie and say this is not the end/you can laugh as if we’re still together”. The song’s murky slink is capped off with “but this really is the end”.

Could this be sayonara from Franz Ferdinand? If this really is the final outing by the band, it’s on a patchy, muted note. Formulaic Thoughts, Tired Words, Inconsistent Actions.