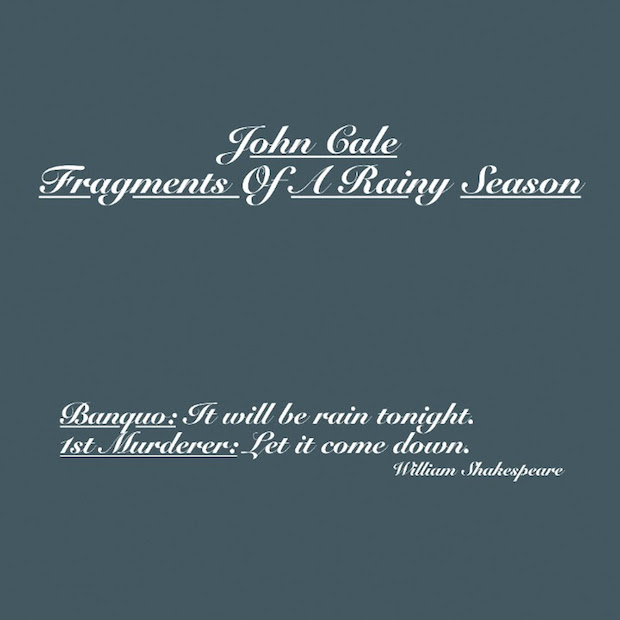 Fragments of a Rainy Season

This live record by musical figurehead John Cale, was the first time the ex-Velvet Underground man had been captured as a solo performer, completely unplugged and stripped back from the avant-punk hubbub that made his name all those years ago. ‘Fragments of a Rainy Season’ has resurfaced after being out of circulation in recent years but for a limited time, it’s available in several different formats including a limited edition triple gatefold vinyl. Across the LP’s 28 tracks, Cale tackles songs from his back catalogue, previously unreleased outtakes and a smattering of covers including his interpretation of Leonard Cohen’s ‘Hallelujah’ and Elvis Presley’s ‘Heartbreak Hotel’; both of which are bewitching when it’s just the sound of Cale’s smooth rasp and the twinkle of piano.

The minimal sound that ‘Fragments of a Rainy Season’ emits is alluring and you can imagine if you’d attended any of the shows Cale played during his 1992 run of performances, you’d have been captivated by such sparse arrangements. There’s a poignant thrum to the way Cale’s vocal trips over the sometimes plaintive and the occasional raucous piano. In some places, the piano can almost be called jaunty too; ‘Paris 1919’ is a fine example of this.

The clear standout moment, which is punctuated by the crowd’s jubilant claps and hollering is Cale rollicking through Velvet Underground’s ‘I’m Waiting For My Man’. Cale it would seem can’t totally jettison the avant side of his cannon as the finale to the classic track finds our protagonist howling like a crazy person whilst making huge, cacophonous noises with his piano. The same can be said for the two versions of ‘Heartbreak Hotel’ one of which is bare and vulnerable while the other is unhinged with blasts of violent strings piercing the nothingness between the moments Cale isn’t singing or playing the piano. The inclusion of strings doesn’t always result in a horror movie-esque moment; the alternative version of ‘Paris 1919’ with added orchestral flourishes is extravagant and pleasingly delicate.

This is most definitely a record for the Cale/Velvet Underground superfan – a live recording to be cherished by a long term devotee to the weird and the wonderful.