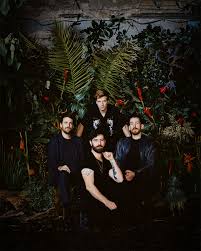 This morning, Foals also confirm a 17-date North American headlining tour, which will kick off in Vancouver, BC on March 18th, with additional stops in Brooklyn, Seattle, Los Angeles, Philadelphia, Boston, and Chicago (full dates below). Tickets for these dates will be available here on Friday, January 25th at 10AM local time (with the exception of the April 16th Washington, D.C. show, which will be on sale Thursday, Jan. 24 at 10AM ET). The band will also perform a headline tour throughout the UK and Europe, in cities including London, Paris, Amsterdam, Berlin, and Glasgow (full dates below).

“There’s a definite idea about the world being no longer habitable in the way that it was,” says Yannis. “A kind of perilousness lack of predictability and a feeling of being overwhelmed by the magnitudes of the problems we face. What’s the response? And what’s the purpose of any response that one individual can have?”

Foals reconvened with Yannis on production duties, who, together with Edwin, also covered the bass parts. They began by writing in a rehearsal space before exporting those sketches into the recording phase at 123 Studios, Peckham, London with the assistance of engineer Brett Shaw. They’d repeat the cycle between the two spaces, effectively creating an ongoing feedback loop as they sought to push every new idea to the finish line.

Foals
Everything Not Saved Will Be Lost – Part 1
tracklisting: