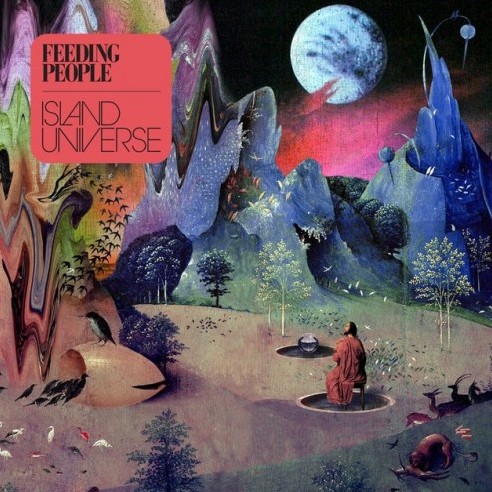 While listening to Island Universe,the second LP from LA teenagers Feeding People, one can’t ignore the imagery of the title. The album is its own little universe, with sounds expanding outward in all directions but like an island, stays within its own boundaries. The liberal use of delay and reverb throughout are at times reminiscent of the darker side of psychedelic luminaries like The 13th Floor elevators or Jefferson Airplane, but the multi-dimensional vocal delivery of lead singer Jessie Jones, along with the heavy, well-crafted riffs of guitarist Louis Fillinger gives the record a stiff rock and roll backbone.

The opening track “Silent Violent” starts off as a smoky ballad with Ms. Jones crooning in a charming, almost Karen Dalton-like delivery. Distorted guitars kick down the door as if to let you know that, while at times soft and delicate, Feeding People are at their core a rock band. The bouncy bass line and sticky chorus of “Other Side” leads nicely into the title track, a soft shimmery ballad with a haunting, almost teasing melody that truly sticks to the ears.

“Big Mother” is a crunchy banger with a catchy hook that ushers in the heavier side of Island Universe, with “Uranium Sea” keeping the temperature up long enough to show off the ample guitar-craft of Filliger. All the textures seem to come together in this middle portion and it starts to gain momentum with “Insane”, a dense rocker that nearly boils over.

Things then cool back down with “The Cat Song (Secrets Of Luna)” which provides a thematic break before entering the home stretch. The tempo, as well as the volume, picks up one more time and the pacing of the album starts to seem very adept. The sequence moves like a good live set with “Inside Voices” and “Desert Song” as punchy standouts of the final third.

Just when it seems that perhaps this group of teens have run out of pixie dust, they downshift once more with “Closer”, an adequately named track that finishes Island Universe the way it starts, with a loud/soft dynamic that sits as a strong companion to the opening number and a clever bookend to a very ambitious sophomore effort.