The Fearless Fury of Dream Wife 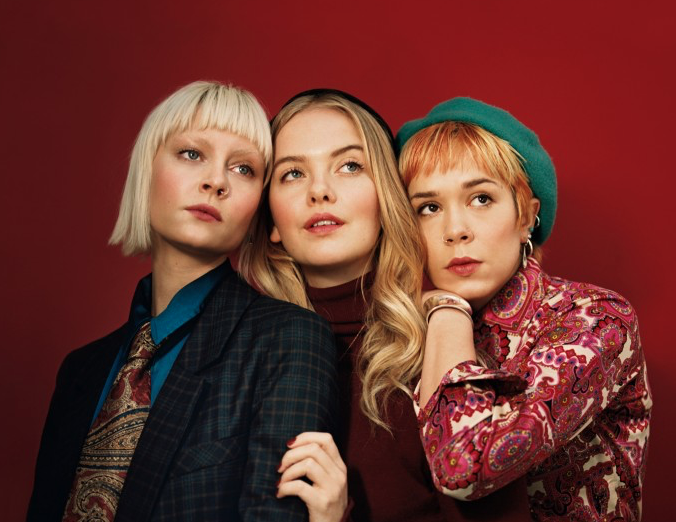 Who would’ve though a simple art project would quickly turn into one of the most empowering and political bands around. After some whirlwind tours and gaining live drums, Dream Wife hit hard early this year with their self-titled album and are only gaining more attention for their blistering live shows.  We sat down with all three members of Dream Wife (And even their friend Dylan) at their May 4 show in Montreal to talk about how Canada was a launching point for the band and why they already have some  macabre memorabilia scattered across England.

Northern Transmissions: How did this project go from being a band you formed for an art project to a full-fledged career?

Bella Podpadec: We didn’t want to just travel around for no reason, so the band made sense.

RM: I was doing performance art for university and I needed something for a gallery piece. I thought it was a good link to make a band whose only purpose was to tour Canada. My tutors loved it, and then we played two songs for the gallery show. We thought “Shit we’re going to Canada” and made two more songs. So we ended up touring Canada with only four songs. We arrived here and it was touring, but spending a week in each city. Our first ever shows as a band though were really in Canada.

BP: It was intended as this six month project.

Alice Go: After we had come back and processed what that was, without just being inside it helped.

RM: Everyone was asking about it back home. There was so much energy between us and we got along so well, it made for such an incredible trip. We ended up with 200 people at our first show here thanks to Dylan. A few months later, we were talking about how fun it was and decided we wanted to continue the band and see where else we could travel.

AG: It became kind of like a challenge. We thought “What else could we do and how much farther can we push this?” and now we’re exploring that more. We’ve been in three continents this year alone.

NT: Given how DIY your early tours of Canada were a few years ago, what about that time made you want to change and up your game as a band?

AG: It was interesting during that process because we went back to a lot of voice recordings from that time. So a lot of that album was drawn from that time in Canada, and we tried to bring that into the studio. It brought that energy of playing around and things being up in the air.

BP: We released an EP two years ago which was a kind of stepping stone between the tour and the album. That was when we first introduced live drums, because last time we had a loop station and we were travelling super light.

RM: We got so used to it being the three of us that we were pretty cautious about adding a drummer, even though we needed one. Alice’s dad is on our EP for example.

AG: A lot of the EP was self-produced and was very hands-on, it’s us making sense of our sound at that time and moving forward. Going into the album live drums were a really important part of the conversation.

BP: Playing with drums and writing with drums made things so much easier. And playing shows with drums, it gave a totally different impact because it hits you in different parts of your body.

AG: We were different before the drums, it was like Le Tigre or something like that. It was such an unconventional show back then.

RM: Speaking of Le Tigre, JD Samson came to our show in New York. After the show, she said some of the kindest words I’ve ever heard. I’m not sure if I can repeat them though (Laughs)

NT: Looking at your LP, what did you want to do differently from your previous material and were Peter Jarrett and Oliver Wright instrumental to changing things up?

BP: But also when you’re used to being in complete control of everything that you’re making, there’s a language you have that might not translate to another person right away.

RM: Even with references too, they can’t totally read your mind. There needs to be a balance without it being offensive. That was also the first time we’d stepped into a studio, because we’d recorded the EP in Alice’s nursery.

AG: That sounds so weird now.

RM: There was also an idea of stepping into the space and learning. We’re just happy it turned out so well.

NT: What did you guys want to change about songs like “F.U.U.” “Kids” and “Hey Heartbreaker” between your Ep and the new version we got on the album?

RM: We wanted those songs to live.

AG: For us these songs are always changing, even at the show tonight they’ll be a different beast already from what’s on the album. The album is kind of a photograph of those songs at a point in time.

RM: There were songs like “Lolita” from our EP that I can’t even remember what it originally sounds like. Even these songs on the album from January, we’ll hear something fun live and change it until we forget the original.

NT: Is this artistic background what’s led you to construct props for your live show, and where does the inspiration for these props come from?

RM: There’s no set now because we couldn’t really carry them on the plane. (Laughs)

BP: It was about making it fun and creating an environment that everyone could go that was different. It also sets you into the idea that you’re being entertained. Now it’s more for special shows really.

RM: For live shows now it’s a lot more about what’s actually happening on stage. But that said Bella made 100 tombstones for one Halloween show. She kept them all in her room until the day of the show.

AG: Then we distributed them in motels all over England. We tucked them in the bed and stuffed the pillows under the duvet so it looked like someone was in the bed. Every little Travelodge up to Scotland has a couple gravestones. (Snickers)

NT: Going back to your DIY aesthetic I thought it was awesome that you put together a zine for your limited edition LP, so what led you to make that and can we expect anymore of these zines down the line?

BP: It was this semi-fictional thing about friends’ bands, it was really just something I was doing at the time. It was kind of a fan-fiction about people I know, and then I thought I should do one for the band. I probably won’t do that for the band in the future because those zines were something I was doing intensively for a while but then stopped. But I’m drawing a lot again so who knows.

NT: On this note what led to the founding of the Bad Bitches club and how has your friend Meg Lavender been instrumental in making this happen with your fans?

RM: We brought Meg on the road with us around the U.K. because we’d been working with her for years and she’d done one of our first photo shoots.

BP: She’s responsible for me and Rakel living together, she put on a bunch of our early shows.

RM: We took her on the road with us and she studied fine art photography, so she wasn’t really a typical tour photographer. She was really more interested in the people that were coming to our shows than necessarily documenting us on stage. So she would take photos of the crowd and go out to get to know the people that were coming to our shows. The “Bad Bitches” as she would call them. She had these amazing conversations about self-empowerment and encouraged young women to show that. She started documenting it and it was such a great connection to show.

BP: The idea of documenting the scene and the community around the shows, and it was putting the audience on the same level with the band.

NT: Looking at a track like “Somebody” how did you want to flip the script on what’s expected of women and really say something about the current social atmosphere?

RM: A lot of our songs and us in general is really about exploring being a women, because you write what you know. It’s also about exploring gig-culture and safe-spaces at shows. The lyrics for that song though were heavily inspired by the SlutWalk in Toronto. That movement has actually become huge back in Iceland (Mjöll is herself from Iceland) and especially per capita. That song was written two years ago, so it was also really interesting seeing all these people open up about their experiences with the #MeToo movement. When we recorded it the lyrics really just came out in one go. That song is for anyone feeling conflicted about gender roles that society has put on them, as well as slut-shaming and rape culture. It’s a powerful song to play live, and it’s amazing because it forms a really great bond with the audience.