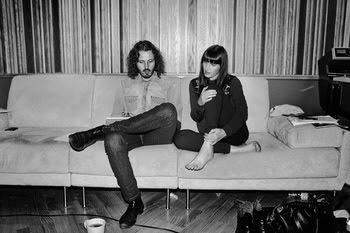 Omaha, is the the U.S. debut from Australian duo behind Falls—Simon Rudston-Brown and Melinda Kirwin—is out now on Verve. “Our songs are at times deeply personal,” says Kirwin, “they’re raw, they’re real, and they’re very honest.”

Rudston-Brown and Kirwin met while students at Sydney’s Conservatorium of Music. The pair spent the next two years playing every Wednesday night at a little hotel in Sydney before heading to the U.S. for the first time to play SXSW. Just a few months later, they moved to Los Angeles. After the move, Falls spent the following year traversing the U.S. playing shows and writing the songs that would become their first full-length release. “The songs on the album are really inspired by the whirlwind of the past couple years, and the sense of longing that’s come with uprooting ourselves like that,” says Kirwin. “Everything happened so quickly and it’s all been so exciting, but there are those moments when you realize what you’ve left behind and all the things that were left unsaid.”