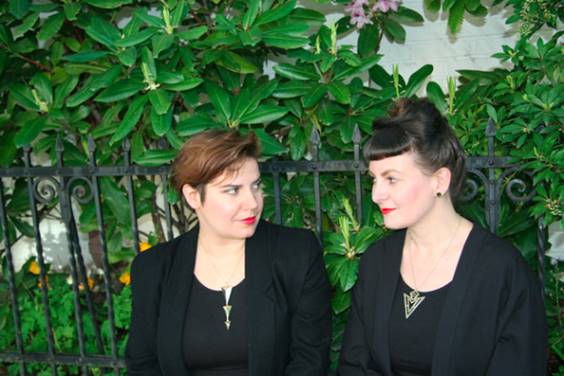 Fake Tears is Larissa Loyva and Elisha May Rembold, who were already established singers and songwriters in their own right. The former has released two spectral albums under the name Kellarissa, has toured the world as a live member of Destroyer and How to Dress Well, and has played in past Mint Records acts P:ano and the Choir Practice; the latter leads the folk-rock band the Lost Lovers Brigade and is a member of Shimmering Stars. The pair first collaborated when Larissa joined the lineup of Lost Lovers, and they continued to hone their chemistry during a stint as backup vocalists in the local ensemble COOL TV.

With this stripped-down duo lineup, Fake Tears began to carve out a new sound focused around haunting, buzzy synths and soaring harmonies. The friends developed their talents as beat-makers, providing a pulsing backdrop for their shadowy synth-pop songs, and they perfected their material during frequent live shows.

Upon signing with Mint, the ladies looked to label-mate Jay Arner to produce their debut album. In just a handful of sessions, they built on top of their existing demo tracks, fleshing out their dual microKORG playing using Jay’s collection of analog synths. The result is Nightshifting, a radiant collection of sparkling electro-pop that is simultaneously spooky and infectious, nocturnal and pop-friendly.

When making Nightshifting, Elisha and Larissa drew on their wealth of songwriting experience, penning material separately and then tying it all together with tight harmonies that act together like a single voice. “She writes, I write, then we bring them together and work them out,” Larissa explains. “There’s the songs Elisha’s written, there’s the songs I’ve written, but we make them our own.”

Nightshifting will be released August 7th on Mint Records. Have a look at the tracklist and listen to “Second Wind” below.