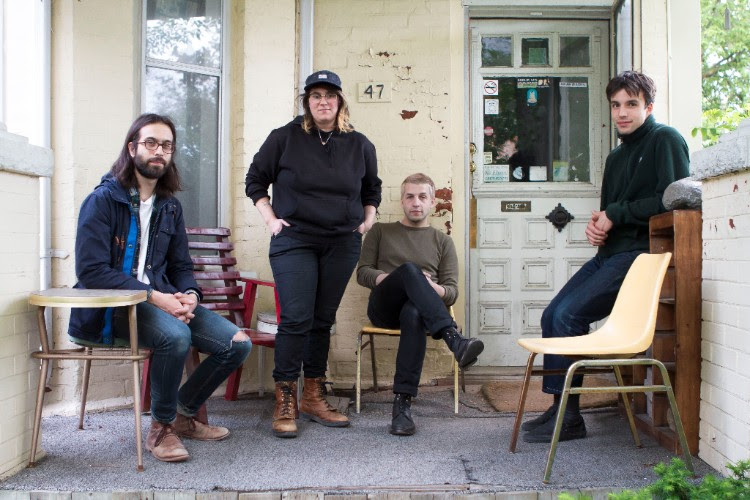 Fake Palms have revealed their new album Pure Mind will be released on September 15th via Buzz/Pleasence Records The album sees the band, under the guidance of producers Josh Korody of Beliefs and Graham Walsh of Holy Fuck, exploring a cleaner and more open sound than on previous releases, and incorporating new elements into their songs. Today, the band are sharing their new single off the album “Glass Walls”.

Toronto’s Fake Palms have long existed at an intersection. Their 2015 self-titled debut LP, released on Buzz Records, filtered pyrotechnically ambitious, high concept post-punk through a deliberately austere lo-fi haze, lending an eerie ethereality to a set of songs that were at once bruising and delicate – high and intricately detailed melodies informed by a sharp pop sensibility housed in a distorted and cacophonous swell of sound pushed into the red with a brooding intensity.

Following the album’s release 2016 saw the band coalesce further as they cycled members and roles while maintaining the core of singer/guitarist Michael le Riche, guitarist Patrick Marshall and drummer Simone TB (veterans of the Toronto scene with a history of contributions to projects like Slim Twig, Beliefs and US Girls), and toured at length together for the first time, playing with acts as varied as SUUNS, Greys, Alvvays, Wintersleep and Holy Fuck.

It was their association with the latter that gained significance for the band as they began to contemplate their second full length. le Riche had begun writing new songs almost as soon as the sessions for their first album were finished, some of which were collected on the 2016 EP, Heavy Paranoia. That release saw the band begin to push at the edges of their musical palette, working with producers Shehzaad Jiwani of Grey’s and Josh Korody (Weaves, Dilly Dally, Fucked Up), while Holy Fuck’s Brian Borchedt assisted with mixing, peeling back the layers of their sound and adding new textures that helped to expose the depth and complexity of their arrangements. Borchert’s bandmate, Graham Walsh, having heard the EP and become familiar with the band live during their time on the road together, then approached le Riche about working on their next LP, which would become the forthcoming Pure Mind, set for release on Buzz Records in partnership with Toronto underground mainstay Pleasence Records on September 15th.

“When we started working on the album, I decided that I wanted to put out the songs I had that sounded the furthest from what we had released until this point,” says le Riche. “I wanted to do things as differently as possible. We took slower songs, ones with less guitar, and tried to do things that weren’t expected of us. We wanted to challenge the idea of what we do as a band, and we wanted to challenge ourselves. I hope that as a band that’s something we never stop doing. We’re at our best when we’re pushing toward the next thing.“