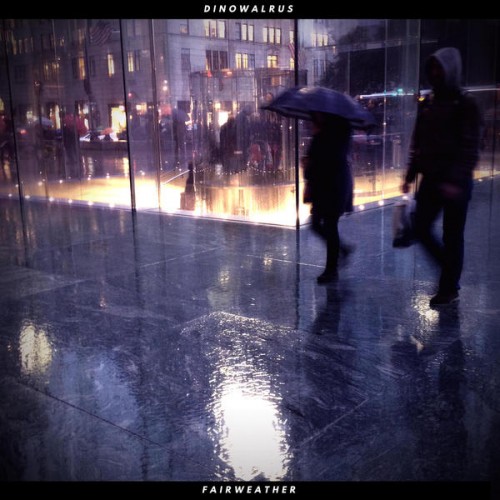 Dinowalrus, the Brooklyn band with solid shoegaze Madchester roots, is back with a new lineup and a stellar new album, Fairweather. Pete Feigenbaum and his band – Max Tucker, Meaghan Omega, Dan Peskin, and John Atkinson – continue to explore combinations of the 80s synth pop and rock infused psychedelia that has been their hallmark sound. Pete, who played with Titus Andronicus, leaves bread crumbs of his musical knowledge all over the tracks, shaping Fairweather into a musical synthesis of modern Brooklyn vibes and past glories of bands like Echo and the Bunnymen, Ride, and My Bloody Valentine. Especially notable is the new way the bass anchors the sound – allowing Pete’s soaring guitar to shine through, and releasing him from the need to do everything with the guitar in terms of structure. Dinowalrus gets its groove on.

On this album, Dinowalrus seems to be toying with dynamic and contradiction, smooth and rough, pushing at all those urban psychic buttons while delivering up gems like “Light Rain”, a sheer spectacle of feel-good vibes to soften the end of summer. And it’s almost impossible not to fall in love with the dreamy emotional pain of “The Silent Earth”.

“Tides”, the first single, offers a glimpse of the group’s sparkling strengths – guitar rising above the electronica, while “Plain Sight” holds up the big sound on a taut line just skirting the clouds, the lyrics peeking through the sway.

“Guilty” brings in a Stones-like swagger, the electronic organ providing a counterpoint to the rhythmic guitar. The contrast of bluesy angles and soft shoegaze gauze makes this one of the stand-out tracks.

“The Payoff” sees Pete experimenting a bit more with his voice, as the song pulls in a multitude of sounds while delivering a stream of 80s feel. Danceable while bitterly throwing out the line “What’s your motivation?”

“Painted Desert” might point to another emerging new direction for the band. An acoustic beauty, moving slowly with the piercing electronic frame, spacey Byrds-infused music to echo through the dark and dirty city canyons. A burst of electric guitar feels like a razor slice through the landscape.

Fairweather is a big canvas of poppy shoegaze delight, ready to bubble through in a cooled down deep breath of heady smoke, expanding the minds of both new and old fans. Great stuff.