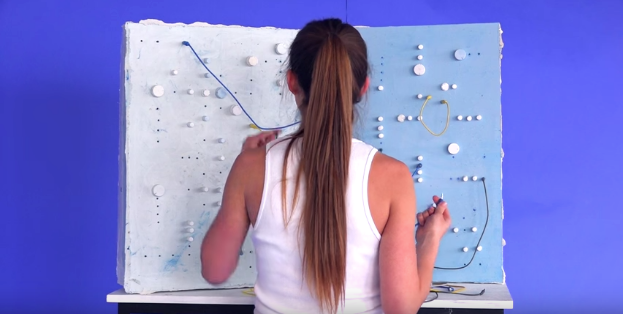 To celebrate the forthcoming release of 25 25, their sophomore LP out August 19th on DFA Records, FACTORY FLOOR release a new video for their latest single “Ya” and announce an ICA (Institute of Contemporary Arts) London Show Thursday August 25th.

The video is directed by Factory Floor and features sculptures by the duo’s Nik Void. “I was looking at the German New York artist Isa Genzken,” explains Void, “and thought I need to make a plaster synth! I like the idea of someone playing it under my instruction off camera then the synth take on a life of its own – like the true nature of modular synthesis.”

Now the duo of Nik Void and Gabriel Gurnsey return to London’s ICA Theater Thursday August 25th to premiere material from their latest minimalist dance exploration live. The event will also include live performances from British visual artist Haroon Mirza. He will be followed by Swedish artist Klara Lewis.

25 25 is the follow up to Factory Floor’s critically acclaimed 2013 self-titled debut. “Ya” is the latest single to be taken from Factory Floor’s second studio album, out August 19th via DFA Records. The new single comes on the heels of “Dial Me In” which the band shared last month.