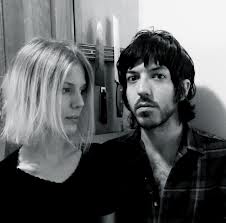 New York’s Ex Cops have premiered the video for “Separator,” the second single off their debut album, True Hallucinations, today, directed by Jason Shaltz, the video captures the energy and exuberance of the song channeled through the band’s home town.

What began as a hazy home recording project of Brian Harding (ex-Hymns) and Amalie Bruun (ex-Minks), has blossomed into a powerful five-piece rock band both in the studio and on stage; Ex Cops released the 7″ single, “You Are a Lion, I Am a Lamb” b/w “The Millionaire,” as the premiere release from Other Music Recording Co. in April of last year before heading in to the studio to record True Hallucinations with John Siket (Blonde Redhead, Yo La Tengo, Sonic Youth, etc.). The resulting album is a mind-altering pop pill that maintains the intimate mood of the original group’s sound, but now presented in widescreen Technicolor.