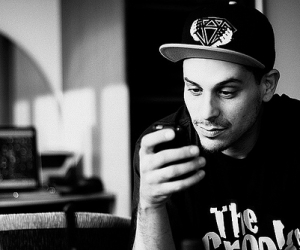 LA-based MC/Producer Evidence announces the fourth installment of his instrumental series entitled Green Tape Instrumentals out June 25 on New York record label/idea shop Decon. Evidence is well known for his musical and lyrical contributions to the venerable hip-hop group Dilated Peoples, and also as a solo artist. His debut solo album,  The Weatherman. Ev employed even more dedication to throughout Cats & Dogs, his second solo album, as well as numerous collaborations with numerous musicians like The Beastie Boys, will.i.am, The Alchemist, Aceyalone and, most notably, Kanye West (work that won him a Grammy).

A rap fiend with an itchy MPC finger, the man born Michael Perretta has always been hyper-productive, and that inclination is most evident in the ongoing series of beat albums he’s trickled out in recent years. Green Tape Instrumentals is a collection of music mostly written and released from 2006 to 2010 along with a few unreleased tracks and follows the similarly-named