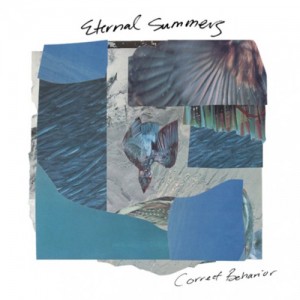 Everyone loves summer. If you polled most people the numbers would probably say that summer is their favourite season of the year, well at least here in Canada. There is a romantic idea of summer, being the time of year when you are devoid of all responsibility, as if you continue to hold on to the notion of the school vacation well into your adulthood. There is a naivety about it, which is part of the appeal, but without perspective of the need for a tilted and stable orbit around the sun to give us four distinct seasons, there would not be life on this planet. The idea of an eternal summer then while cute is completely impractical, devoid of any brass tacks. So goes the challenge of the band with the same name releasing their second full length in Correct Behavior.

The knock on Eternal Summers first album was that while earnest and easy to listen to, it lacks a certain substance to the songs. The band from Ranoake, Virginia improves on things in the sophomore release but not enough to solve the problem of making a memorable impression. The low-fi indie girl pop quota has been filling up a lot in the last couple of years which makes it hard for a band like Eternal Summers who seem to have
done everything right, except write a song that really stands out above the rest. Nicole Yun leads the charge on most songs with a soft angelic voice that for some odd reason reminds me of Dolores O’Riordan of the Cranberries. In fact the entire album seems to evoke the 90’s girl rock pop band pathos. The problem with a band like Eternal Summers built on easy listening indie girl pop is that it seems easy to make it sound good, but when it’s living in a world where it’s not a rarity, it’s easy for it to get lost in the shuffle.

I will give credit to the band for realizing where they needed to evolve from the previous one, and have given the songs some variance from the hard driving “Heaven and Hell”, to “Girls in the City” which sees Daniel Cundiff take over with some spoken word vocals. Those two songs being the outliers are actually the frontrunners on an album that wants it to go in a direction that it hasn’t quite been figured out yet. Lying around in the summer all day can turn your brain to mush, it’s nice for now, but being in it for eternity
sounds like hell.