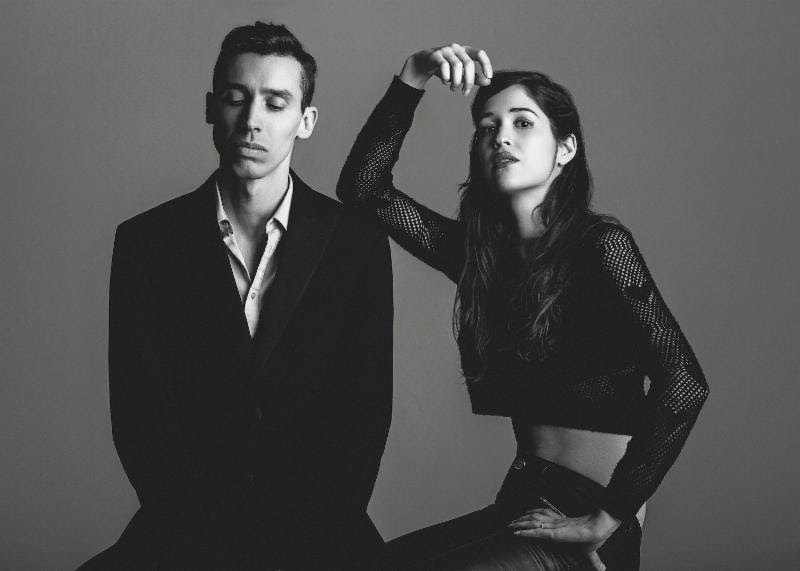 The electronic duo Essaie pas is comprised of Marie Davidson and Pierre Guerineau. Marie has released two solo records, with Pierre being best known for production work on underground musicians such as Dirty Beaches and Femminielli. Essaie pas was born on a hot summer night in 2010 – the mix of drawling guitars, français mumbles, and minimal electronics caught the ear of DFA Records, who booked the pair to open for Factory Floor on their first North American tour and who’re now set to release their debut album, Demain est une autre nuit (Tomorrow Is Another Night).

The origin story of Demain est une autre nuit begins when the band returned from their first European tour to find that they had lost both their studio space and apartment. La Brique, their studio, practice space and renowned underground music institution, had fallen victim to the city’s rapid gentrification and closed permanently. Conflicts with their wacky landlord had also left them without an apartment, leading them to return to Montreal’s winter without many prospects. They lucked into a temporary practice space during the off-hours at the offices of Le Filles Electriques, an independent interdisciplinary festival producer. This space soon became Pierre’s studio, and Marie’s home.

The many corridors of the empty industrial building provided a way for Marie to work out in the frigid Montreal winter nights, running “everywhere possible, listening to techno, acid, and italo disco, being mutually inspired by the space and the sounds.” Eight months later, Demain est une autre nuit was born.

“This environment influenced our music,” says Pierre, “The sounds are more clear and open, the production has more depth, on a full frequency range.” Their living conditions on tour were another major influence, “Staying at different people’s places around the world for a whole year accentuates the feeling of being a stranger wherever you go, even in your own town, but also creates a feeling of being part of an international community, opposed to a scene that exists only in one city.”

Essaie pas’ music cannot be tied to a specific genre. It is a document of the encounter of two human beings mutually experimenting with music and sounds, and eventually falling in love while doing so. They are constantly pushing the boundaries of their comfort zone with new methods and technique, aiming to communicate that which is unspeakable.Their musical language is vibrant and varied – comparisons range from Film Soundtracks, Electronic Body Music, Disco, and Techno, with sensually-delivered lyrics exploring the themes of fantasies, obsessions, and the feeling of “The Void”.

Marie explains, “The title comes from a joke we made when going to bed one morning, talking about our plans for the next evening.” Pierre adds, “Night is a place of freedom, a place where fantasies and obsessions are not tied by moral constraints. It’s also a time where the feeling of loneliness is stronger and when emotions and memories arise, whether you are facing it or running away from it. I think the tension and sense of urgency on the record comes from that dichotomy.”