Time, death, life, living, hope: these are the big themes from which L.A. Salami has crafted his current release, The City Of Bootmakers. Lookman Adekunle Salami is a man in his mid-twenties with a restless spirit and boundless creativity. He makes indie-folk, songs that turn intimate tales into epic anthems and big issues into campfire laments.Today he shares the video for track “England Is Unwell”.

The video’s director Elliot Arndt comments: “In L.A.’s song, you find this ruthless tale of 21st-Century migrants escaping their war-torn homes only to find broken British dreams – but it’s all dressed up in a jolly orchestral folk arrangement and it’s totally intrepid yet extremely frail. And that’s what got me thinking about this idea and this aesthetic. It was a very ambitious one from the start cause we didn’t have the money to do any of it but somehow we still did it. When LA introduced me to (Art Director) Flaminia everything started seeming a bit more possible. She stayed awake for three consecutive days leading up to the shoot, just cutting, sticking, painting, and freezing her toes off. We owe it all to her.”

The album is the realisation of concepts that have been brewing in Salami’s melting pot mind for a few years. The bootmakers reference comes from the adage “bootmakers be kings,” which Salami has always seen to mean that, despite anyone’s power, they’re nothing without their boots, meaning the people round them, their city or inspiration. The city side of things, meanwhile, represents a mythological place that harbours what the world is going through.

Originally, Salami intended the track to be a Sleaford Mods-style rant but added a playful edge by delivering its satirical message in the form of bouncy indie-rock. “The song is saying, ‘look, they’re using a book that is the basis of a religion, it’s just crazy people who don’t give a shit about other people using it as an excuse to do terrible things.’” The bar-room blues folk of “Brick Lane” was meant by Salami as “an obvious pisstake.” “There’s a problem with gentrification but at the same time the beginning of gentrification is generally good, as it’s the people who can’t afford the best of things, who tend be artists. Then they make the area attractive and it heightens the value… it’s a dragon eating its own tail.” Salami sings the song from the perspective of what he describes as a “less than self-aware hipster.”

It’s a record of questions and answers: the expansive acoustic-rock of “I’ll Tell You Why” dovetails with the sparse “England Is Unwell” (“my little musical number”), whilst the Van Morrison-style thump of “A Man, A Man Without Warning” signals the record’s “more cerebral” section. “It’s dealing with existential problems, time and death and what you’re supposed to do in the world,” says Salami. These are songs celebrating our biggest fears, looking them in the eye and tackling them head-on. 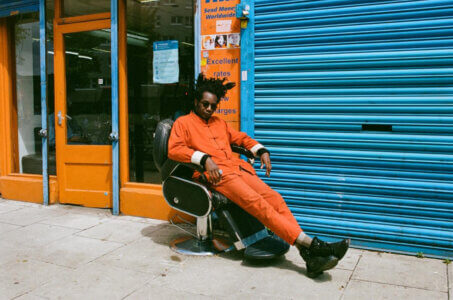