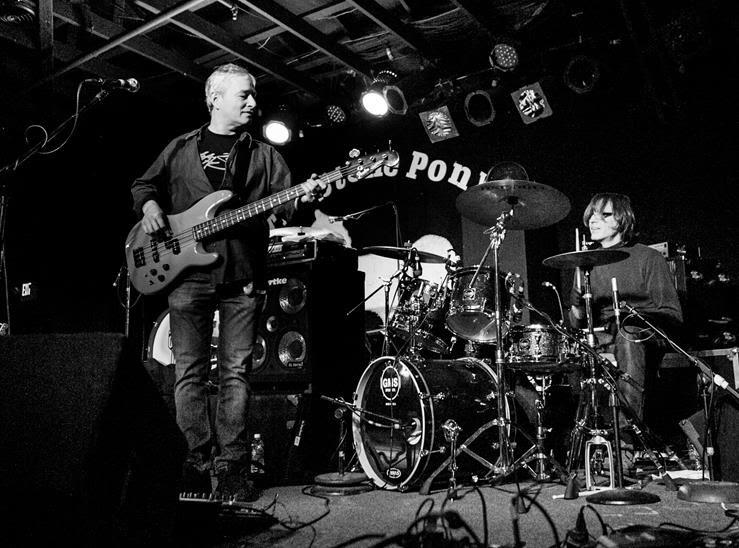 End of Love is a collective of musicians brought together to bring to life the compositions of Jay Deegan, Irwin Menken and Jody Stephens. The project began when Jody and Irwin met in Europe, Jody was touring with his band Big Star Third and Irwin was on the road with Lee Ranaldo from Sonic Youth. A year later they joined forces and added New York City based guitarist Jay Deegan.

The music reflects their love of straight up Big Star influenced pop songs, the alt- country feel of bands like Uncle Tupelo and add the art rock/noise elements practiced by Sonic Youth and others. Their forthcoming album “Ghosts on the Radio” incorporates all of these elements and draws upon friendships with and admiration for the talented group of musicians who joined them in making this record.

Lead vocals are shared by the up and coming talent Skylar Gudasz of Big Star Third, Django Haskins of Old Ceremony, Karlie Bruce of Escort, and Elisa Peimer, a NYC based singer/songwrite. Guitar parts are by Jay Deegan and a group of legendary guitarists including Nels Cline of Wilco, Lee Ranaldo of Sonic Youth with additional contributions by Abe Seiferth of Phonograph and Chris Stamey of the dB’s among others. Mikael Jorgensen of Wilco added syth and John Stirratt also of Wilco added backing vocals. The album is produced by Ted Young with assistance from Irwin Menken, Chris Stamey and John Stirratt.

Jody on End of Love:

“I got involved as a member of End of Love in November of 2013. I had met Irwin in Europe a year earlier when I was touring with Big Star Third and he was playing bass for Lee Ranaldo. We ran into each other again about 18 months later in New York. He told me about the project and asked if I’d play drums on a couple of tracks. He and Jay came to Ardent in Memphis and we had a great day in the studio. Over dinner he asked me to join the band and I agreed.

At the time I was beginning to work with Luther Russell on what has turned out to be Those Pretty Wrongs. In that project I am co-writing with Luther and singing but not playing drums live. Big Star’s Third live, Chris Stamey’s idea, affords me the chance to play drums and sing Big Star songs. An incredibly special event, but it only happens a few times a year.

So, when Irwin asked me to join End of Love it seemed like a great opportunity to continue to play drums and to feel like I’m making a contribution to songs I like. It also only happens a few times a year so it’s all a nice fit.”