Ela Minus Shares Her Own Acts of Rebellion 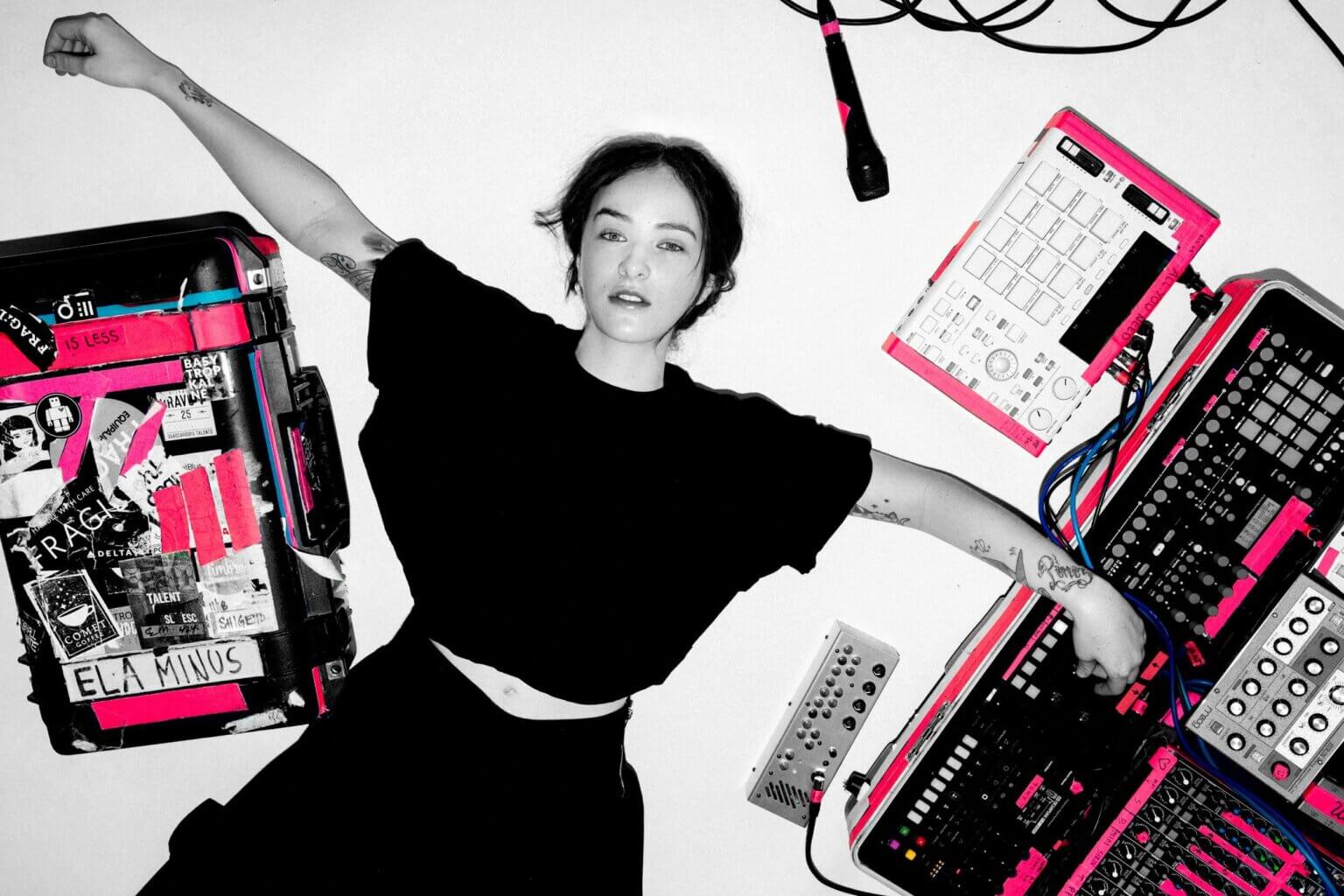 Interview with Ela Minus
TwitterPinterestPocketRedditFacebookEmail

Every single day we make a ton of different choices. From the mundanity of what time to get out of bed to the more important aspects of navigating the significant relationships in our lives. Hopefully, we can all be mindful enough to make these choices positively and thoughtfully. As Ela Minus says these little decisions are our own tiny acts of rebellion. The Columbia born songwriter and producer explores this idea on her debut album, appropriately titled acts of rebellion. As she says, acts of rebellion is a collection about the personal as political and embracing the beauty of tiny acts everyday in your life.

Sometimes it’s not the grand gesture but a series of little things that can define your philosophy in life. After growing up in Columbia playing drums in a hardcore band, Minus found herself in Boston attending the prestigious Berklee School Of Music and through her disdain with the competitive nature of the program discovered and embraced the community she found in the club scene. Minus moved to New York City and set up a small studio in her apartment where she started crafting personal and thoughtful electronic music with the purpose of putting her life philosophy front and centre in her songs. Now back in Columbia and with her record about to be released, the intelligent and articulate producer runs us through how she came to find her voice in an unexpected place.

“I’m back in Columbia at the moment,” she explains over a zoom call. “I was only supposed to come for a month because I wanted to see my family. Everything is so sensitive this year and I wanted to spend more time with them and the lease on my apartment in New York ended, so it seemed like the perfect time,” she says with a chuckle. Minus had spent the last five years living in the city and over time realized that it wasn’t the best fit for her. “New York has been very good to me. It really grew on me. It wasn’t so much when I first moved there but I am a fan now but after the five year mark you really become a New Yorker and I found myself missing nature and the mountains. Plus everyone was living in their tiny apartments, completely in lockdown not knowing what to do, so I came home.” Now at home in Columbia, Minus has been able to think about what her record means to her and where the inspiration behind it all came from and how it fits in to her own narrative as well as the narratives of the people she surrounds herself with.

“I remember reading that book Diary by Chuck Palahniuk. There was a moment in the book where the housewife character who used to be an artist but stopped after she falls in love and gets married. He describes in the story how she would carve her name on the back of the plates while she was washing them as a way to leave her mark as an artist and that image really stuck with me. It was this little act of rebellion on her part.” Minus took the imagery in that novel to heart and around it fashioned a personal philosophy that encapsulates the way she interacts with the world and also with herself. “I’ve been obsessed with that idea,” she explains, “and started to see it in everything. I think in general, it’s amazing that as you get older you start to really understand the power of time and doing things for longer periods. If it’s practicing music or personal relationships and the little things you do everyday. You get good at anything the more you do it and I’m that person with my friends that tells them to be patient and practice and you will find whatever it is you are looking for.”

Practicing on the musical side of her life has been an ongoing thing for Minus since she started playing drums in a band when she was only 11 years old. “I played in one band as a teenager from like ages eleven to eighteen,” she says with a laugh. “When we started it was punk rock and then became more emo and then like hardcore. It is 100% my background. I can think of so many different ways how my approach to music from that experience became so ingrained in me. This spirit of DIY and not doing it because you want to accomplish anything. Just doing it.” After playing with a band for so long, Minus did realize that there were certain things that she wasn’t getting creatively from the process and this helped inspire the way she creates now. “I got tired of being in a band,” she explains. “I wanted to make music for the sake of it. For some bands the democracy of it can make the music suffer. It’s like you are killing it little by little that way. I just wanted to make music that felt honest and everyone involved in the project was 100%.” Minus received the opportunity to attend Berklee in Boston on a scholarship so she jumped at the chance but once there unfortunately found that she wasn’t feeling comfortable in the school’s cutthroat environment.

“I was more annoyed than unhappy,” she says with a laugh. “I was there for jazz drumming and one out of only two girls in my year. Here I am, twenty four hours a day surrounded by dudes, all just trying so hard to be the best drummer alive and I knew that that mindset isn’t everything. I was already listening to more electronic music at the time and I discovered Four Tet and stuff like that that is super harmonic.” This music acted as a gateway for Minus to explore the city’s club scene, something she had never experienced before but found it oddly familiar and comforting. “I don’t remember where I found out about this first party I went to but I decided to go see what this scene was all about. I feel I am very shy in real life and when I was younger I was very used to having my band with me all the time. You don’t have to talk to anybody at your shows because you have your group. When I moved to Boston I lost that and going to these parties, alone where no one was talking, just dancing and it was this community, this communal experience felt the same way as when I was 15 at a hardcore show. It felt like home again. There wasn’t an electronic scene in Columbia that I was aware of. It wasn’t a thing in my life until In Rainbows came out but I consciously understood what a synthesizer was and started going from there.”

Minus jumped right into the musical side of creating her own electronic music. She moved to New York and set up the gear she had acquired in her tiny apartment and worked at it everyday. “I did everything at home in my apartment in New York alone. I love playing live and improvising. I have it all set up in the same way, always in my apartment. Over time, I’ve recorded or written everything without thinking. Really improvising and improvising in live shows. I was asked by a friend to do a show the first time and I did the one and then someone asked me to do another and it all just kind of kept happening from there.” Minus’s process was directly inspired by what she was doing onstage. “I think that is why the record is so clubby. I really feed off the energy of the crowd and the dancing and I would improvise these sequences and see how the audience would react to them and I’d make a mental note if it was good and then come home and work on songs based on these.” The record is full of amazing energy and listening to it you can feel how these songs could’ve been birthed in a live setting with the energy of hundreds of people dancing to them. Inspired by the club scenes of New York and Detroit of the 80s and 90s, acts of rebellion is full of warm grooves and a quietly political bent. “I listen to a lot of late 80s and early 90s club music and the reality then, was these artists that were trying to make amazing dance music but they were getting oppressed for who they were and that was seeping into their music. I wasn’t trying to make a protest album but I had these ideas that kind of just came into it.”

Now that the album is on the cusp of release and we are still in the middle of a global pandemic that has cancelled all artists touring plans, Minus has been thoughtful about not only how to promote her album but what we are all going to take away from these hard times. “Two months ago before I had experienced being on a flight, I think my thoughts about all this would be way more optimistic. It was shocking to be on that flight from New York to Columbia. When things originally happened I oddly felt more peaceful than I had in years because it seemed like we were all, as a society, getting together to save lives and care about each other and to teach each other. It was like things finally landed where they should be. I was full of these beautiful thoughts and hope for the future when everything will be better but then I saw the flight and all these assholes that are going to go back to normal as if all this had never happened and if enough of us think that way than this could affect us for another five to ten years. I hope we can all learn and do something about all of this.” Minus is positive though about where we will end up and even though she can’t perform her record in a live setting, she is using her time to still foster connection. “It’s been interesting to me because I only learned how to record this music to play it live and didn’t care about anything else. It was made intentionally to play live and dance with people and for me to not be able to do what I think I am the best at is tough. I started questioning what I love about live shows and I feel like there is a special connection in them and I found that connection because I was so deprived of it in other aspects of my life. If we have to wait a year to have shows again, then that’s fine but I didn’t want to delay the record. I felt like it would be selfish for me to wait. I tried to put so much love in to it and I hope people can listen to it and feel powerful and free and connected.” acts of rebellion is a potent and powerful statement from this young artist. It is imbued with a sense of hope that all these little choices, these seemingly mundane decisions that we make everyday will add up to something more. A chance to change, connect and ultimately heal.