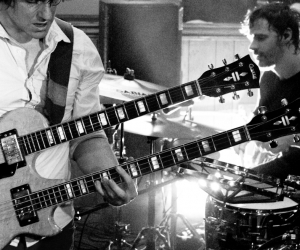 Los Angeles-based instrumental “power duo” El Ten Eleven is fresh off the road from their spring tour, which included six weeks of headlining dates and two weeks of shows along the west coast supporting British electronic act Bonobo. Today, the band announces a fresh batch of US/Canada dates which includes two Canadian shows opening for Peter Hook & The Light, an appearance at this year’s North Coast Fest in Chicago and headlining dates throughout the mid-west, east coast, and Colorado.  Full list of dates below including their summer shows in advance of the tour this Fall.

To celebrate the tour announcement, El Ten Eleven shares a previously un-released remix by Brooklyn producer Eliot Lipp. This track was originally intended to be released on the band’s Transitions Remixed which is the remix album of their most recent full-length Transitions LP. This remix album was El Ten Eleven’s first official foray into the remix world and featured work by an eclectic curation of producers including Com Truise, Slow Magic, Amp Live (of Zion I), Max Tundra, D33J, Odd Nosdam, and more – even the band’s own bassist wizard Kristian Dunn contributed one.