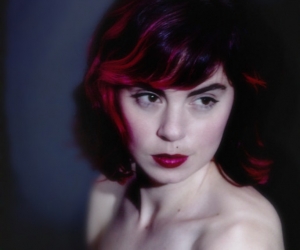 New York City’s Ejecta is a duo, one of those classic stories of two musicians in different bands—Leanne Macomber, of Neon Indian; and Joel Ford, of Tigercity— meeting on tour and becoming “fast friends”. It was 2009. After sharing their personal work with each other over the ensuing years, it was decided that they could possibly work outside of their previously defined obligations.

Macomber had mostly worked with ill-tempered four-track machines in bedrooms nationwide, as her Fight Bite project had been predominantly a tiny operation she kept alive after a move from Texas to New York. By 2010 Ford knew his way around an actual studio. His résumé included producing such forward thinking and critically acclaimed acts as Autre Ne Veut, Oneohtrix Point Never, and the split namesake, Ford & Lopatin.

In the summer of 2012, Ford sifted through a stack of Macomber’s prickly demos, and reworked a track called “Silver” to the singer’s enthusiastic approval. He also provided her with a completely new piece of music, now known as “It’s Only Love.” Once the singer added her singularly whispery vocals and acrobatic melodies, Ejecta was real.

Over the next year, the two worked on nearly a dozen songs, with Macomber as the fundamental songwriter, and Ford behind the boards. A single was released, “Jeremiah (The Denier),” on Driftless Recordings, a completely independent label founded by Ford and collaborator Patrick McDermott.

Macomber describes Ejecta as a character, one that conceptually represents her various inner-struggles, and yet also as a way to “deflect” them. This alternate identity acts a conduit for Macomber’s countless longings, and as such is always depicted completely nude. Leanne explains a desire for Ejecta to be “universal” and “timeless,” and this heartbreaking pop record is certainly capable of being both of those things. But she also refers to the character as both an “everywoman” and even an “everyman.” And in that way, it becomes evident that we are dealing with a character.

Dominae, which will be released November 5th, 2013, on Driftless Recordings in the United States. The also brand new, London-based, Happy Death will handle the record over the rest of the globe. Happy Death was founded by Peter Darlington and Ed Horrox (4AD). Expect more genre traversing music from both labels.