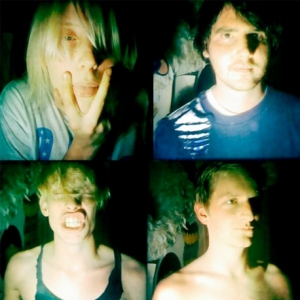 Eating Out has shared track “Come Around” from their upcoming Burn 7” out December 3rd via Suicide Squeeze. Check out the single above. The track and EP as a whole showcase the band’s penchant for the triumphant loud-quiet-loud structures and electric catharsis of groups like Hole and L7.

Eating Out is the crunchy, distorted, pop-oriented project of Nü Sensae drummer Daniel Pitout. The big distorted guitar riffs and heartfelt melodies of Pitout’s brainchild are a notable departure from Nü Sensae’s roaring assault. But Eating Out also has the proud distinction of being a Vancouver supergroup of sorts. While Pitout assumes the songwriting duties and the accompanying positions of guitarist and vocalist, fellow Sensae Brody McNight rounds out the guitar department, White Lung vocalist Mish Way lends her bass skills, and Peace’s Geoff Dembicki fills in on drums. While vestiges of Nü Sensae’s brash tonalities, White Lung’s melodic treatment of hardcore, and Peace’s bold anglophile pop can all be heard in Eating Out, Pitout’s songs owe more to girl-grunge groups of the early nineties than to any of his co-conspirators’ primary projects.

The three songs on their 7” for Suicide Squeeze Records originally appeared on a limited run of 150 cassettes released by Burger Records back in 2012. “Burn”, “Come Around”, and “That’s My Man” are given a new life on vinyl. The 7” is limited to 500 copies (100 on opaque pink/lavender/yellow-mixed vinyl, 400 on black) and comes with a download code. The songs are also available digitally worldwide.