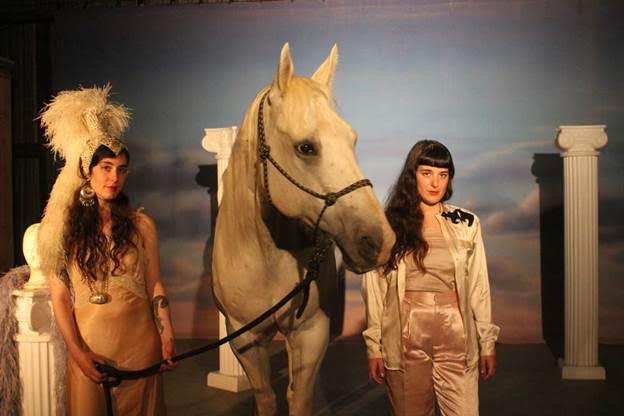 Tasseomancy, aka Canadian sisters Sari and Romi Lightman, will release their new album, Do Easy, on November 18 through a new label co-venture between Hand Drawn Dracula and Outside Music in Canada and Bella Union for the rest of the world. The first single and title track from the upcoming album is available to stream now.

“Do Easy”, was “Inspired by the wild flamingos of all the night karaoke soirees and the domestic manifesto of William S Burroughs’s The Discipline of Do Easy,” says Romi Lightman. Written from Romy Lightman’s sub-conscious in a basement apartment she says that “Burroughs’s doctrine on finding ‘the easy way’ struck me as something rare and I hung onto it like a piece of protection. Later on, I discovered that Genesis P-Orridge believed this text to be one of the greatest magic techniques for retraining the mind. Endorsed by Occultists, stoners, freaks, the ultra zen and the highly sensitive, ‘Do Easy’ attempts to infuse the mundane with a gentle joy and a sense of simple delight.” Additional vocals by Sari Lightman and arrangements by band members Johnny Spence on synth/piano and Evan Cartwright on drums with musical accompaniment by Brodie West on saxophone. The album was written in both Toronto and Montreal.

Do Easy from Tasseomancy is the first co-venture between Outside Music and Hand Drawn Dracula, two of Canada’s leading independent labels. The recent collaboration will see Outside and HDD working together on select titles; “James at Hand Drawn Dracula has an amazing ear for talent, we’re happy to get behind his discoveries and generate some more awareness on some great albums” says Outside Music managing Director Evan Newman.