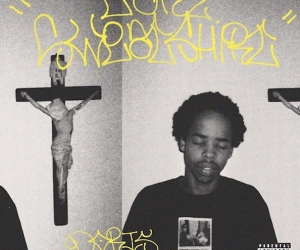 In 2010, hip-hop collective Odd Future rose to infamy with a series of digital releases that centered on references to drugs, murder and sex. At the tender age of 16, Earl Sweatshirt released his debut mixtape Earl, which was both praised and chastised for its dark lyrical content. The release made numerous year end lists, but Sweatshirt had been sent to Samoa by his mother to attend a teenage rehabilitation camp and was unable to enjoy his new found success. Nearly four years after he left, Earl has returned with his debut studio album Doris.

Judging by Sweatshirt’s lyrics, the time he spent away from the rest of Odd Future has given him time to reflect on his past exploits and achieve some modicum of sensitivity. On the 2nd track “Burgundy”, guest Vince Staples pokes fun at Sweatshirt, asking “Why you so sad and depressed all the time…we want raps, don’t nobody care how you feel”. Sweatshirt then enters with a lyric about his grandmother passing away while he tried to release Doris, and his difficulty in setting his priorities straight. By placing these personal anecdotes so early in the album, it becomes clear that Sweatshirt intends to distance himself from the dismemberment and other crass content found on his debut.

Earl Sweatshirt’s maturity is further accentuated by the guest spots throughout the record. On Sasquatch, fellow Odd Future member Tyler, The Creator drops verses about ordering Taco Bell and ‘doing gymnastics’. When he returns towards the end of the album with “Whoa”, Tyler references Sweatshirt’s change in lyrical content and then takes control of the song, bringing the content back to the ultra-violence found on Earl. If anything, this and other guest spots detract from the album; Sweatshirt’s heart-on-his-sleeve raps are so mesmerizing that I wanted the album to be free of outside voices.

Equally on par with Sweatshirt’s lyricism is the slew of producers that he picked to be on the album. Odd Future mainstays The Internet and BADBADNOTGOOD tracks blend seamlessly with established producers like The Neptunes and RZA. Layered samples and off-kilter boom bap are the focus here, and nearly every instrumental is dense and exciting, rewarding repeat listens. Doris is a strong contender for hip-hop release of the year, and will likely find itself on many year-end lists, regardless of genre.