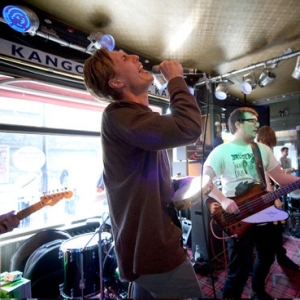 “Tough Luck” originated from a poem I wrote about my grandad’s webbed feet titled “Thalidomide Poem.” The original poem was written from a child’s “pondering” point of view. Intrigued by difference as a child, I asked why my grandad’s dissimilar feet were so unlike mine and I was told it was due to a tablet which was used “in the olden days” to help mothers get through morning sickness during pregnancy.

I later found out that this tablet was the drug Thalidomide, which caused numerous birth defects. The song is portraying the gamble of trusting in something without knowing the true consequences. “Touch Wood,” everything will be fine. But then, “Tough Luck” – sadly, you’re left misfortunate with your gamble.

Since forming in 2009, Leeds-based Eagulls have become synonymous with a discontented, disillusioned kind of anger, molded into bullets of post punk that’s rife with urgency and aggression.

For a band like Eagulls, touring is their lifeblood, as shown through the relentless bouts of gigging that have colored their four years together, in between working tedious day jobs in the bars and retail outlets of Leeds together. Booking support slots with the likes of Iceage, Merchandise, Parquet Courts, and Fucked Up they’ve carved out a reputation for chaotic and confrontational live shows.

Now, following further standalone releases, their self-titled debut album is complete and slated for release in early 2014. Finessing the incensed spirit of their early tracks and gigs, it sets its stall out as a heavier, darker and more exhilarating step on from what’s come before. “Nerve Endings,” opening track and first taste of the record, encapsulates that in throbbing bass and George hollering “can’t find my end” whilst “Fester-Blister” provides an anthemic streak cutting through a wall of frenetic noise. “Tough Luck” takes inspiration from outside the punk pool associated with Eagulls, boasting a rumbling Joy Division-esque bassline. It all ends on the searing rush of “Soulless Youth,” which finds George declaring “I never feel fine/They’re soulless inside… the soulless youth,” with enough bile to make it clear just how he feels about his generation.

“We’re all more pessimistic, more jaded, more cynical,” explains Goldy of the band’s moodier shift. “When you finish uni, you’ve got optimism and you think everything’s going to be alright. You think you’ll just take a shit job in a shop and you’ll only have to do it for a while but then you’re still there a year later…”

It’s this frustration and sardonicism that fuels Eagulls and lights a match under their first LP. Though they admit to there being “lighter moments” on the record, on the whole it’s a gloomy, overcast affair. Influenced by post-punk and shoegaze (primarily the sonic assaults of My Bloody Valentine) combined with their own background in hardcore bands, it follows their first trip to America earlier this year for SXSW (a trip the band sacked in their jobs to take) – the catalyst for their signing to US indie label Partisan.

With the record now complete and ready for release, expect their own unique brand of mayhem to be lighting up venues around the country as they return to their natural environment of the road to reinforce their abrasive brilliant reputation once more.