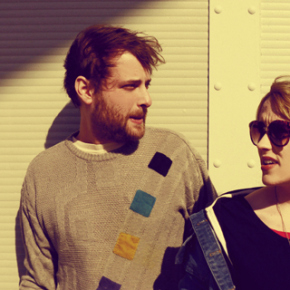 Dungeonesse, the project of Jenn Wasner (Wye Oak, Flock of Dimes) and Jon Ehrens (White Life) that would cozily, retroactively extend the East Coast Family’s reign into Baltimore, have premiered their new video for “Nightlight” today. In it, director Ariana Natale imagines a minamal space – a dreamworld full of magical jellyfish that bloom and glow while “Nightlight” pulses and trembles along. The video works like a one-way mirror into the ambiguous borderland between conciousness and unconciousness, between reminiscing and being haunted, that echoes the song lyrics Wasner sings, “…if I’m in the light, I believe it that I’m over it/ but when it’s late at night, I can feel it taking over and/ I’m not over it, I’m not, I’m not, I’m not.”

Of the video, Wasner says, “‘Nightlight’ is one of the most bittersweet songs on the record for me. It’s about the kind of heartbreak that finds you even once you think you’ve escaped it–the kind that keeps you up at night, agonizing over those little things you can’t forget.”

“I had such a great time working with Ariana and her crew–envisioning the bleary-eyed, sleep-deprived fantasy world that exists in the space between waking and sleeping, where dreams and reality overlap and eventually become one.”
Jon Ehrens also recently shared a fantastic Baltimore Club mix with Animal New York. Wasner & Ehrens both hail from Baltimore, and Ehrens says of the mixtape, “I stumbled upon combining a classic club jam ‘Ryde Dat Thang’ with an Italo disco song, ‘Din Don’ by EVO, about 2 years ago. I played it recently for a friend who wanted more so I made a bunch and made this BMORE like DISCO mix.
http://www.secretlycanadian.com/artist.php?name=dungeonesse