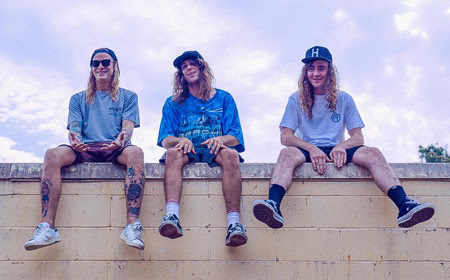 Australia’s Dune Rats have released the video for their new single “Bullshit”, the brand new single – and first new material in two years. A no-nonsense garage rock anthem that calls it how it is, the video for “Bullshit” was filmed at a backyard party in Byron and is an ode to everything Dune Rats hold high. “We figured it was a good way to spend a bunch of cash with our tightest friends from the bay”. “Bullshit” was produced by FIDLAR front man Zac Carper and drops this Friday May 13th through Dine Alone Records in North America.

“Bullshit” was written while Dune Rats were on the road with FIDLAR across the US and Canada for two months last year. The 27-date tour, which included Canadian dates in Toronto, Montreal and Vancouver, took them from Denver to Philly to LA and everywhere in between – including an electrifying performance at a sold-out Webster Hall. It was during this tour when the seeds of collaboration with Zac Carper began to develop, with Carper taking the boys from sessions inside an RV on the road to Joshua Tree and culminating in a Melbourne studio where new Dunies material was born.

“Bullshit” is an ode to everything Dune Rats hold high: music, touring, parties, meeting rad people and, most of all, their mates – the lords that are by their side through thick and thin. To say “Bullshit” is going to be a new crowd favourite is an understatement, and just in time, too…Dunies are hitting wheels to the tar with Violent Soho and DZ Deathrays on the EPICLY sold-out 10-date Australian Waco tour, which kicks off today.