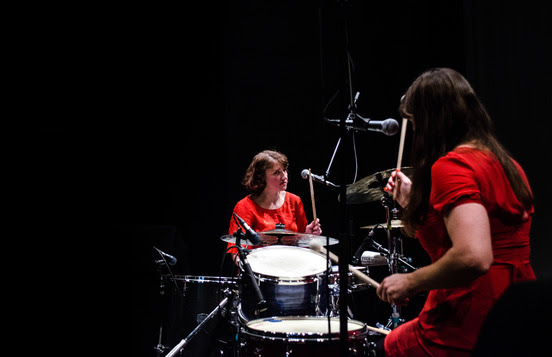 In addition to the UK dates announced a few months ago, Nottingham-based drumming duo Rattle will be joining The Julie Ruin for their entire European tour in November and December. They will also be playing other EU shows with bands such as Sleaford Mods.

The group focus almost exclusively on drums and more drums, beneath a delicate overlay of vocal harmonies and percussive effects. Formed by Katharine Eira Brown (also of Kogumaza) and Theresa Wrigley (also of Fists), Rattle began as an experiment in crafting rich songs and melody using drums and voice alone.

Rattle released their eponymous debut album in August via Upset the Rhythm and I Own You Records. Their music weaves and intertwines post-punk, minimalism and experimental rock, through off-kilter rhythms, patterns and counter melodies. Their live performances are at once hypnotic, monastic and danceable. Often starting by picking out the ghost notes from the drums to develop a melody, the music then reveals itself in rounds and harmonies with layer upon layer of rhythm and vocal, lending a choral feel to some of the tracks.