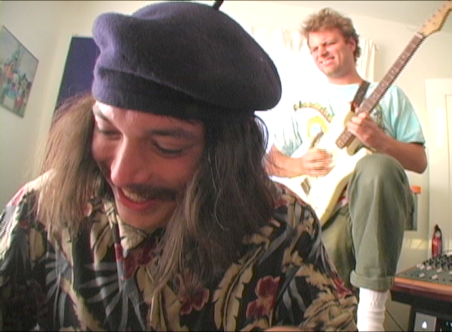 Following the release of his debut album The End of Comedy, out now via Weird World, and a string of shows around his hometown of Los Angeles, Drugdealer, aka Michael Collins, returns with a video for the album’s title track. Directed, edited, and filmed by Andrew Storrs, and shot in and around Collins’ home and studio in Los Angeles, the video features cameos from Mac DeMarco and Natalie Mering of Weyes Blood, who also contributes vocals to the song.

Collins on ‘The End of Comedy’ video:

“Andrew Storrs, an old friend of mine and Natalie Mering’s, came to visit us in Los Angeles and document a few days a little while ago. I’ve always loved his filmmaking – capturing moments in our friend’s lives in a really magical Cinéma vérité form. Basically, it’s a snapshot of a particular moment while living downtown here in LA; playing piano, seeing friends and skating around. The song here is one of my favorite collaborations of all time – Nat and I recorded the whole thing very naturally when she was still living in Far Rockaway, NY about a year ago. It was simple and fun to make, and no one better to represent this on video than Andrew Storrs. His YouTube channel ‘nationwideonyrside’ collects incredible films with some of my favorite people in the country.”